Nigel Lievaart’s 5th grade design finally gets animated in his University of the Arts Utrecht graduation film, released May 24 to support turtles worldwide. 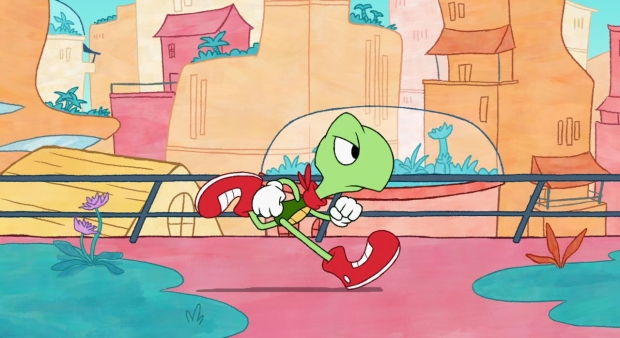 We’re sorry to say, we missed World Turtle Day this past May 24, and the online release of Speedy the Turtle, the 2D animated graduation short from Nigel Lievaart (director), Anouk O’Leary (art director), and Coen Balkestein (producer). The film is based on a character Lievaart first designed in 2004, when he was in the 5th grade. He had fallen in love with Saturday morning cartoons, and wanted to create a character he could join on imaginary adventures. The director drew inspiration from his own pet turtle. As they always say, write what you know. Or, in this case, draw.

In cartoons, turtles are usually depicted as slow, old, sometimes wise, sometimes not. The young Lievaart fancied a more Road Runner / Sonic the Hedgehog direction, and so Speedy was born...on a filthy piece of notepad paper. Years later, in developing his graduation film at the University of the Arts Utrecht, Lievaart went back to the well, resurrecting his cartoon turtle as an ode to the character that started his artistic career. Speedy the Turtle was brought back to life once again.

The film took the team 13 months to complete, beginning in September 2017. Lievaart produced the majority of the animation, though he passed the school’s deadline by two months. Recognizing the amount of work that went into the late production, the graduate film jury decided in the team’s favor; they all passed and graduated with honors. Though the film stands alone as a short, it was designed as a pilot, with the hope that one day Speedy could become an animated series. As they always also say, hope springs eternal. Find out more about the Speedy the Turtle team on social: