In addition to the 800 Euro main award at the festival in Žilina, Slovakia, juries bestowed awards for the best music video, student film, video game pitches and video game jam. 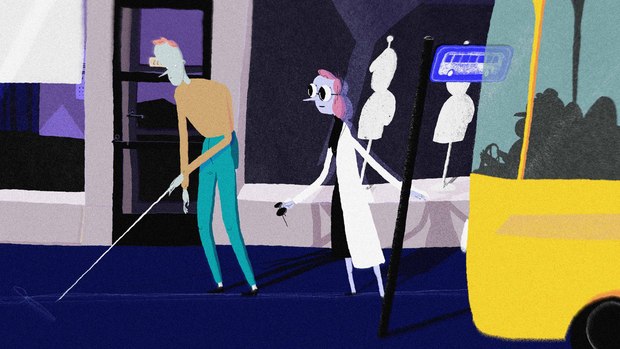 Morgan said about the winning film: “Using expressive animation, it presents an absurd vision that is nevertheless rooted in reality. The main character observes a grotesque world, until she finds the courage to join it -- with a helping hand. Although this was one of the first films we saw, we did not lose it from our sight throughout the whole festival.”

This honest, colorful story of drawn animation came to life thanks to the support of crowd funding. It focuses on an optician whose usual day is interrupted by several extraordinary clients, each of whom sees the world in an unexpected way.

The jury also awarded the best student film: “We gave the student award to a playful film that races against time, bombarding us with a series of hilarious and inventive ideas about how to clean up your flat.” The Anča Student Award and 400 EUR went to Finnish animator Heta Jäälinoja for Penelope, her graduation film at the Estonian Academy of Arts.

In the International Competition of Music Videos, Marcos Sánchez from Chile won for The Unnatural, created for Los Angeles-based poet and musician Claire Cronin. The Anča Music Video Award jury was comprised of Kostas Pataridis (Navis of the demogroup ASD from Greece), media artist Heidi Hörsturz from Germany and Beáta Kolbašovská, the Slovak new media artist. This Anča Music Video Award winner -- which received 400 EUR -- evoked “... a deep melancholic atmosphere. It tells a story that takes you on a journey. Minimalistic composition using a distinctive color palette and strong use of shadows describes the background environment while keeping the action center-framed. There is a clear progression in the story from characters’ introduction to the dramatic ending,” according to Fest Anča.

Children in the audience selected the the Anča Kids’ Award winner (400 EUR): the fairy tale The Little Bird and the Caterpillar by Switzerland-based German director and animator Lena von Döhren.

Awards were also given to fledging authors and students who presented their interactive multimedia projects at the Game Days Pitching Session. Ivan and Peťo Galdík won with Zoja. The jury liked that game project created the impression of an atmospheric journey with its extraordinary visuals and deep personal experience.

The next opportunity to see Fest Anča 2017 winning films will be at Pohoda festival in Trenčín on Saturday, July 8 at 9pm in the Martinus Literary Tent.