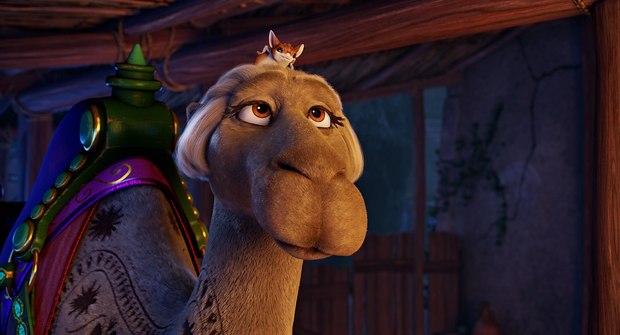 A new teaser trailer for The Star -- the forthcoming film from Sony Pictures Animation marking the feature debut of Oscar-nominated director Timothy Reckart, is now available online. The teaser trailer will also appear in theaters Friday, July 28, with The Emoji Movie, giving a first look at the faith-and-family film telling the story of the first Christmas through the eyes of the animals who witnessed it.

Reckart garnered an Academy Award nomination in 2013 for his stop-motion animated short Head Over Heels, his student thesis film produced at the National Film & Television School in the U.K.

In The Star (previously titled The Lamb) a small but brave donkey named Bo yearns for a life beyond his daily grind at the village mill. One day he finds the courage to break free, and finally goes on the adventure of his dreams. On his journey, he teams up with Ruth, a loveable sheep who has lost her flock and Dave, a dove with lofty aspirations. Along with three wisecracking camels and some eccentric stable animals, Bo and his new friends follow the Star and become unlikely heroes in the greatest story ever told -- the first Christmas.

Featuring new music by Mariah Carey, The Star is executive-produced by DeVon Franklin (Miracles from Heaven), Lisa Henson and Brian Henson (The Jim Henson Company); produced by Jennifer Magee-Cook; with a story by Simon Moore and Carlos Kotkin; and screenplay by Carlos Kotkin. Digital animation is provided by Cinesite Studios. Columbia Pictures and AFFIRM Films present in association with Walden Media, Franklin Entertainment and The Jim Henson Company, a Sony Pictures Animation Film.