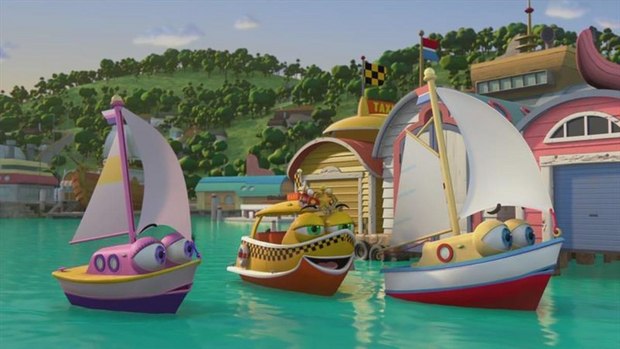 SYDNEY -- Essential Media and Entertainment, an independent producer in Australia, has announced that its preschool animation series, Sydney Sailboat, has been acquired by Sony Pictures Television for its Tiny Pop TV channel. The deal, brokered by international distributor Raydar Media, covers all rights in multiple territories including the UK, Ireland, South Africa and 50 other Pan-African territories. The acquisition coincides with the appointment in Australia and New Zealand of Licensing and Merchandise Agents, The Fusion Agency, who will launch Sydney Sailboat at the upcoming Melbourne Toy Fair, March 19-22, 2016.

Formerly known as Bubble Bath Bay and rebranded for the international market last year as Sydney Sailboat, the series is currently screening on NBC Sprout’s award-winning breakfast slot in the US and returns to Australia’s ABC KIDS prime time morning slot on April 4, 2016.

“We are thrilled that young children in these new territories will discover Sydney Sailboat and are confident the Tiny Pop audiences will engage enthusiastically with the universal characters and storylines,” commented Essential Media’s Head of Family, Carmel Travers. “It is also great timing for the series to be making a splash into the toy world as part of Fusion’s L and M portfolio”.

Fusion Agency’s Licensing Manager Lou Elkington added, “Sydney Sailboat lends itself to a great toy range, with the different boat characters we are positioning this as Thomas the Tank Engine on the waterways! The series is definitely resonating with parents and kids both in Australia and abroad”.

The 52 eleven-minute animated series takes children into the fun-filled lives of adventurous young Sydney Sailboat and his close band of nautical friends as they explore the amazing world of Bubble Bath Bay. With a broad appeal to both young and older preschoolers, the series launched on ABC KIDS in Australia in 2015.

Raydar Media represents Sydney Sailboat for all territories outside North America and is the appointed global brand manager for Sydney Sailboat Licensing and Merchandise.

"We are thrilled to be placing Sydney Sailboat on Tiny Pop. With access into 24 million households in the UK alone, Tiny Pop is increasingly becoming the ‘go to’ channel for preschoolers,” remarked Raydar’s Director of Children’s Programming and Licensing, Pindy O’Brien.

Sydney Sailboat was commissioned by ABC KIDS in Australia. An international co-production between Australia, Malaysia and Ireland, it was produced by Carmel Travers, and directed by award-winning animation director, Steve Trenbirth. Production partners include Essential Media and Entertainment in association with Shambles Communications, Ideate Media, Telegael Teoranta and Lemon Sky.