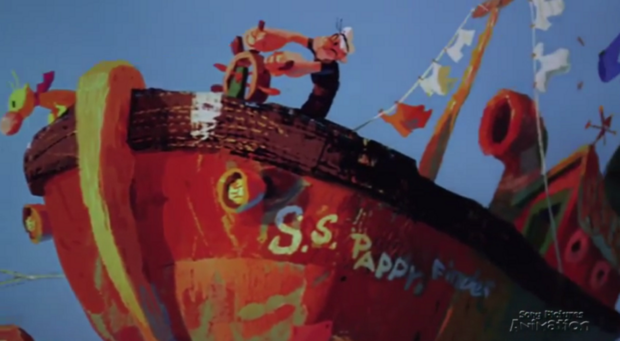 The footage -- which isn’t intended for the final film -- gives a good look at Popeye, Olive Oyl and Popeye’s old nemesis Bluto, and provides comic mayhem aplenty. Watch the test footage, with an introduction from Tartakovsky, below:

The project is a very personal one for Tartakovsky, who avidly watched old black-and-white Popeye cartoons when he first moved to the U.S. from Russia as a child. Then, when Tartakovsky went to film school, he had the good fortune to be instructed by Gordon Sheehan, one of the animators working at Max Fleischer Studios from 1935 to 1940, when Popeye was made.

With Hotel Transylvania 2 still in the works, Sony has yet to set a date for the Popeye feature, although Tartakovsky hopes the release of the animation test will speed things up.

"I'm kind of hoping that the reaction from animation fans will be so loud and so strong that Sony will be eager to put Popeye into production," Tartakovsky said in an interview with the Huffington Post. “That way, once we finish working on Hotel Transylvania 2, we just move on over and begin working on Popeye. And then have that film out in theaters in a year or two.”