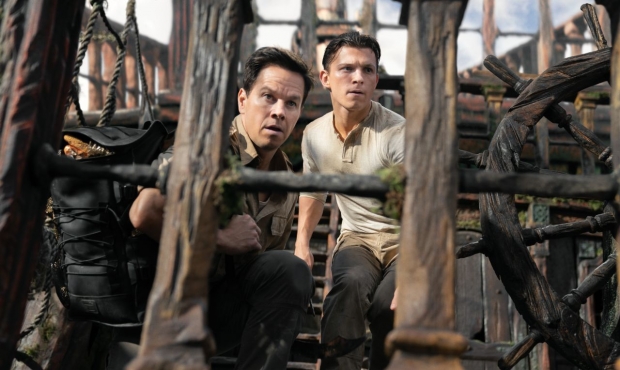 Sony has dropped another trailer for the long awaited Uncharted, the film adaptation of Naughty Dog’s beloved PlayStation video game franchise of the same name, which has been in development off and on since 2008. The theatrical release is now so close we can touch it! The film, pairing Tom Holland and his Spider-Man appeal with ever popular Mark Wahlberg hits theaters on February 18, 2022.

In the movie, street-smart thief Nathan Drake (Holland) is recruited by seasoned treasure hunter Victor “Sully” Sullivan (Wahlberg) to recover a fortune lost by Ferdinand Magellan 500 years ago. What starts as a heist job for the duo becomes a globe-trotting, white-knuckle race to reach the prize before the ruthless Moncada (Antonio Banderas), who believes he and his family are the rightful heirs. If Nate and Sully can decipher the clues and solve one of the world’s oldest mysteries, they stand to find $5 billion in treasure and perhaps even Nate’s long-lost brother... but only if they can learn to work together.

Check out the trailer and get ready for an epic adventure:

The film stars Holland, Wahlberg, and Banderas along with Sophia Ali and Tati Gabrielle. Based on the hugely popular PlayStation video game by Naughty Dog, the movie is directed by Ruben Fleischer. *** Note: a previous version of this news listed Edwin Rivera as the production VFX supervisor. Edwin wrote us to say that while he helped a bit, Chas Jarrett did all the heavy lifting and should be credited.