James Corben leads an all-star voice cast in a modern-day take on the classic story by Beatrix Potter. 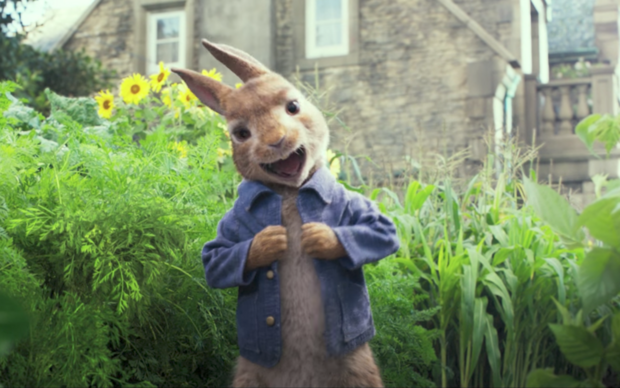 Sony Pictures Animation has released a new international trailer for Peter Rabbit, its upcoming hybrid live-action/CG-animation feature film due in theaters on February 9.

Peter Rabbit, the mischievous and adventurous hero who has captivated generations of readers, now takes on the starring role of his own irreverent, contemporary comedy with attitude. In the film, Peter's feud with Mr. McGregor (Domhnall Gleeson) escalates to greater heights than ever before as they rival for the affections of the warm-hearted animal lover who lives next door (Rose Byrne). James Corden voices the character of Peter with playful spirit and wild charm, with Margot Robbie, Elizabeth Debicki, and Daisy Ridley performing the voice roles of the triplets, Flopsy, Mopsy, and Cottontail.

The new trailer is filled with gags, showcasing the CG bunnies and other animal friends in their quest to outsmart Mr. McGregor and consume as many of his vegetables as possible:

Based on the beloved story by Beatrix Potter, Peter Rabbit is directed by Will Gluck (Annie) from a script he co-wrote with Rob Lieber.