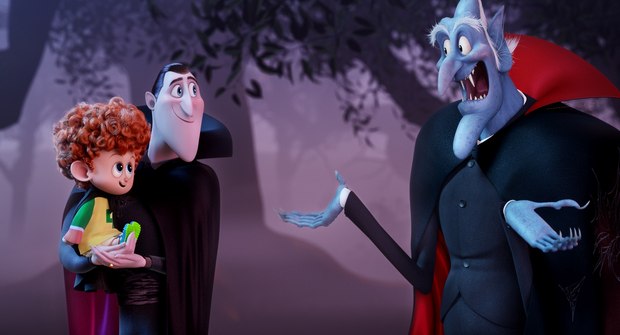 CULVER CITY, CA -- Sony Pictures Animation’s monster hit Hotel Transylvania 2, currently topping charts and setting records at the worldwide box office, marks the return of the Drac Pack in an all-new comedy adventure. Like its hit 2012 predecessor, the new film is directed by Genndy Tartakovsky and features the voice talents of Adam Sandler, Andy Samberg, Selena Gomez, Kevin James, and many others.

Also back for the sequel are Supervising Sound Editor Geoffrey G. Rubay and his sound team from Sony Pictures Post Production Services. They worked alongside Re-Recording Mixers Tom Johnson and Michael Semanick, Composer Mark Mothersbaugh and Music Editor Andy Dorfman in building the movie’s soundtrack. Rubay, in fact, has created sound for four animated features for Sony Pictures. He also served as Supervising Sound Editor for both installments of the Cloudy with a Chance of Meatballs franchise.

As is always the case with sequels, the sound team on Hotel Transylvania 2 was challenged not simply to match their earlier efforts, but to find ways to push further. In this case, there was plenty of opportunity to do so, as the new feature introduces additional characters, locations and plot twists that required inventive sound treatments.

“We had a much wider variety of monsters to work with,” Rubay recalls. “The cronies, who are large man-bats, were an especially interesting challenge.” Rubay and his team created the signature wing sounds produced by these over-sized creatures by blending recordings of cardboard, plastic sheeting, a leather jacket and even lighting gobos borrowed from the Sony Pictures lighting department.

The team was also charged with creating a number of new sound environments as the plot for the new feature has the characters venturing out from their hotel home into the broader world. For one memorable action sequence, recordists captured sounds of motocross racers roaring around a Southern California BMX track. In some instances, the sound team refined or reimagined sound treatments for returning characters. Notable among these is Blobby, a green Jell-O-like creature whose body is composed of thick gelatinous rings. “The treatments for his voice and movement were very complex,” recalls Rubay. “It was very challenging to capture the blobby-ness of him…his wet, burbling essence.”

Blobby’s voice is actually a mix of several vocal performances. “We took the best bits of the vocalizations and melded them with gurgling, wobbly sounds to create the final product,” says Rubay.

“And it scaled really well,” he adds, noting that at one point, Blobby inflates to the size of a blimp. “We got expansive with it; we let it go with the picture and followed it wherever it led us.”

Tartakovsky was constantly encouraging the sound team to make the sound treatments bigger and better, according to Rubay.  “Genndy is a fantastic director,” he notes. “He is good at describing what he wants and he doesn’t deviate. He puts up the target and we try to hit it.”