Snoop Dogg Gets Animated for ‘Sanjay and Craig’ 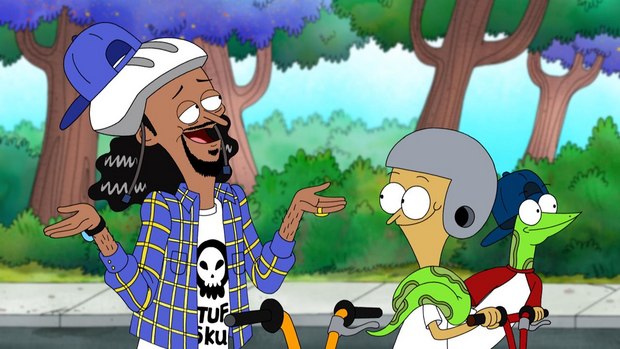 Snoop Dogg guest stars as Street Dogg in the new episode of ‘Sanjay and Craig’ airing May 17.

Music icon Snoop Dogg guest stars as Street Dogg, a rap icon who moves in next door to Sanjay and Craig in the special half-hour premiere of Emmy-nominated series, Sanjay and Craig, “Street Dogg,” Sunday, May 17, at 7:30 p.m. on Nickelodeon. Street Dogg is a cool, funny, friendly guy who is always eager to rhyme with the kids. He’s come to town to escape the bright lights of L.A., chill out, make some new music and live a quiet suburban life.

During the special, Sanjay and Craig discover that Street Dogg was once part of a rap duo with none other than Remington Tufflips, the boys’ action-movie idol. They set out to reunite the former pair, but their failed efforts only lead to a town divided -- and the mother of all rap battles!

Sanjay and Craig is an original animated series that follows the misadventures of Sanjay, an excitable and irreverent 12-year-old boy (Maulik Pancholy, 30 Rock) and his best friend Craig, a smooth-talking snake and master of disguise (Chris Hardwick, The Talking Dead). Together, they embark on awesome kid-inspired quests that are at times totally ridiculous, absolutely gross and weirdly sweet. The series was created by Jim Dirschberger, Jay Howell and Andreas Trolf, and is executive produced by award-winning animation team Chris Viscardi and Will McRobb.