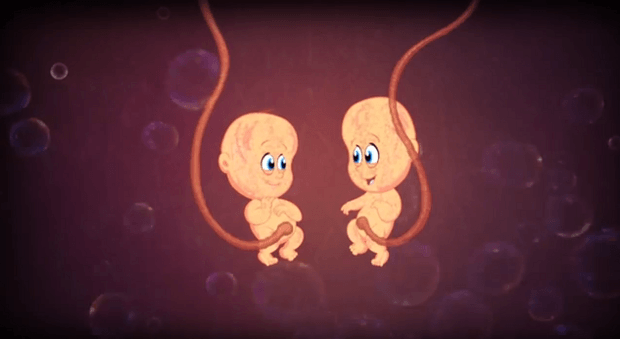 Bennett, along with fellow comedian Nick Rutherford (The Office, Kings of Summer), plays one half of a pair of fast-talking, highly opinionated, animated twin fetuses biding their time in the womb until delivery day. “We knew they would be thrilled by the roles,” said Boukadakis. “It’s every actor’s dream to play an animated fetus. It’s the sole reason they attend Juilliard.”

As founding members of the LA-based comedy troupe, Good Neighbor, Bennett and Rutherford had previously worked together on a long list of comedy projects, adding a kinetic layer of familiarity to their on-screen chemistry. “These two guys have known one another for so long, they may as well be brothers,” said Waldman. “It only served to make their performances as twins confined in a cramped amniotic sac that much funnier.”

Despite touching on a controversial social issue, the filmmakers state that the film has no political agenda nor takes any kind of position one way or the other. “We were inspired by the subversive and irreverent tone and subject matters of shows like South Park,” said Waldman. “It’s amazing what you can get away with when your main characters are cartoons. There’s an inherent fun and silliness baked into the experience. It’s theater of the absurd.”

Boukadakis adds, “I happened to be in New York and caught the musical Book of Mormon on Broadway. It was the most offensive, shocking, and uproariously funny thing I’d ever seen. The audience was apoplectic in hysterics. I realized then that when it comes to comedy nothing is or should be sacred. Funny is the king we serve. And may that king forever reign.”

The live action portion of the film was shot on location in LA with the animation sequences designed by Waterman Studios in southern Florida.