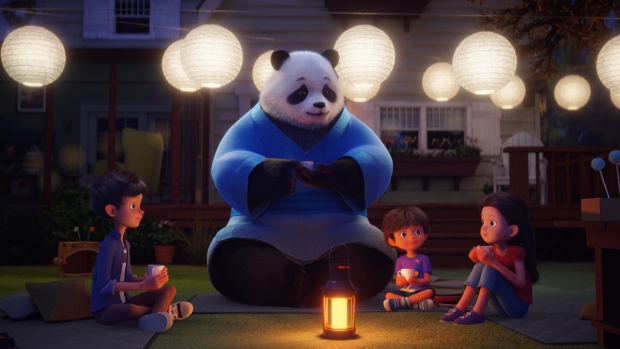 Stillwater tells the story of siblings Karl, Addy, and Michael, who have a special next-door neighbor: a wise panda named Stillwater. His friendship and stories give them new perspectives on the world, themselves, and each other helping to open their eyes to the quiet wonders of the world around them.

Catch a glimpse into the first episode with a sneak peek clip:

The theme song for Stillwater, entitled “Never Ending Dream,” was written and composed by singer, songwriter, producer, and instrumentalist Kishi Bashi, and will be released on Apple Music on November 13 and wide on December 4. Kishi Bashi also composed the series’ score with fellow composer Toby Chu. Karl (Judah Mackey) builds a spaceship, but no one thinks it will fly. An unwelcome summer rain gives Michael (Tucker Chandler) a new perspective on fun.

Addy (Eva Binder) gets frustrated with Karl (Judah Mackey) for not sharing a game. Karl receives a toy robot that is not what he expected.

Michael (Tucker Chandler) is hired to pet-sit a neighbor’s dog for the weekend. Things do not go as planned when the kids try to watch a lunar eclipse.

Addy (Eva Binder) feels sad after losing a cross-country race. Karl (Judah Mackey) is unwilling to give up his favorite shirt, even though he is outgrown it.