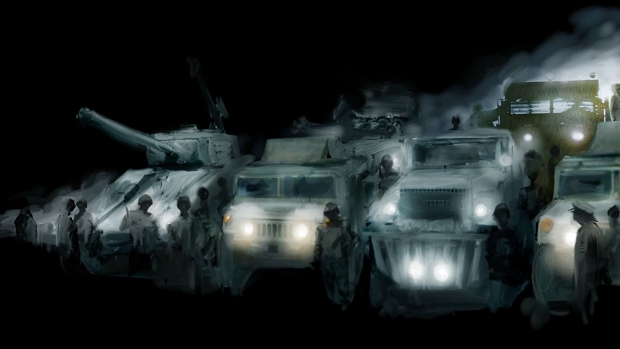 Martyn Pick has just shared with AWN a riveting clip and images showcasing his animated segments in the award-winning documentary film, Coup 53. 10 years in the making, the film, released digitally today, documents the CIA and MI6’s covert action in 1953 to successfully overthrow democratically elected Iranian leader Mohammad Mossadegh in order to regain US-UK control of the country’s oil. Coup 53 is directed by Taghi Amirani and co-written and edited by the legendary three-time Oscar winner Walter Murch (The Godfather, The English Patient, Apocalypse Now).

One of the most striking visual elements of the film is a series of dramatic animation sequences with an aesthetic reminiscent of war paintings. The animation dramatizes witnesses accounts of the 1953 unrest where little or no footage exists. These visuals are the work of Martyn Pick, a fine artist and animator whose credits include the dystopian fantasy feature Ultramarines: A Warhammer 40,000 Movie. Pick, a graduate in Fine Art Film from Saint Martin’s School of Art, brings to documentary filmmaking a unique combination of live-action, performance, traditional oil painting and animation.

“We didn't want the animation to be a literal graphic representation of events,” Amirani explained. “We wanted another-worldly feel, more like flashes of an emotional memory. Our animation director Martyn Pick and his team surpassed all out expectations with their beautiful work.”

According to Pick, “The Coup 53 painterly animation was about dramatizing recollections of the traumatic events of the 1953 Coup [in Iran]. Contemporary painters I looked at were those who deal with memory or history such as Gerhard Richter, Luc Tuymans and Peter Doig; their images, often from a film or photographic source, are worked up with oil paint to evoke a sense of a real memory struggling to focus and coalesce within the medium. This captured the subjective nature of the reminiscences. The thick rich paint impasto and dynamic forceful brushstrokes of artists such as Frank Auerbach and Frank Kline were referenced to expressionistically visualize the tumultuous violence of these events.” Pick’s unique technique, “painting into pixels,” involves smearing digital images as if they are wet oil paint. First, he creates extensive color storyboards like those used in traditional animation. Then, he directs live-action bringing together greenscreen footage and mobile phone shots. He “smears” the digital images and integrates them with real paint texture.

According to the filmmakers, their shooting multi-camera is a first in animation and had the benefit of giving Walter Murch plenty of coverage and options to cut the documentary and make it alive with spontaneity. Cross-cutting and handheld camera techniques created an urgent sense of being thrown into the tumult of the street violence. The final process to finish the animation involved digital painting, done frame by frame with a small select group of artists to maximize intensity of movement and texture.

The film launches for digital viewing today, the 67th anniversary of the 1953 Iranian coup.