Student thesis film ‘Small People with Hats’ by Sarina Nihei wins the grand prize for short animation at the 2015 edition of the Ottawa International Animation Festival; Cartoon Network’s Emmy-winning miniseries ‘Over the Garden Wall’ is awarded the grand prize for best animated feature. 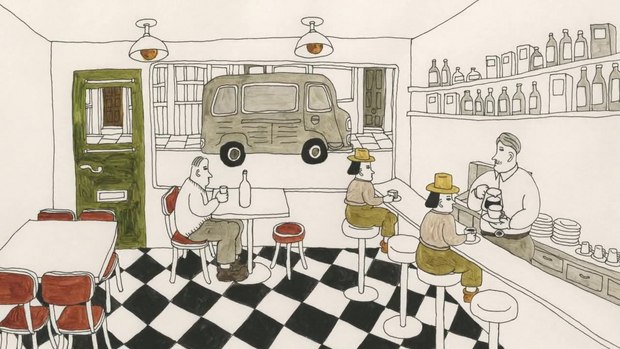 A freelance animator and illustrator from Japan, Nihei studied animation at Tama Art University in Tokyo where she finished a BA in graphic design in 2012. She graduated from the Royal College of Art in London with an MA in animation in 2014. Nearly seven minutes long, Small People with Hats is a hand-drawn animation with acrylic paints and black pens on paper. The story, which offers a surreal and ironic perspective on the absurdity of society, is about the small people wearing hats who cannot avoid ridiculous situations.

“[Small People with Hats] is a brilliantly written absurd script with a compelling visual picture and sound that successfully interprets a political reality of our time,” commented the short film competition jury. ‘Over the Garden Wall’

Over The Garden Wall is a classic adventure tale about two young brothers, Wirt and Greg, who find themselves lost in a strange forest. With the help of a bluebird named Beatrice and a nameless frog, Bret and Wirt travel through a magical land of clothed animals and dancing pumpkins on their way home before a mysterious beast catches up with them. Earlier this month, Over The Garden Wall received an Emmy for Outstanding Animated Program.

“The Grand Prize goes to the film that expressed the awe and wonder we felt as kids with a mix of amazement and magic, while realizing that scary things might not be as scary as they seem,” the Competition Feature Jury said in a statement. “For its unbridled romp through the joy and darkness of growing up, the award goes to Patrick McHale’s Over the Garden Wall.”

Prize for Best Animated Series Made for Children
Bird and Bear
Dan and Jason (U.S.)

Honorable mention to Sonámbulo by Theodore Ushev and Focus by Alex Boya.