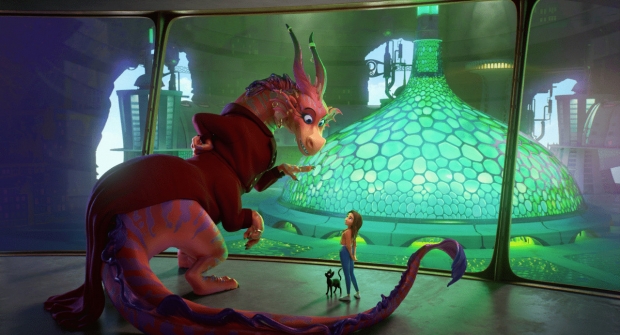 Releasing Friday, August 5 on Apple TV+, Luck follows 18-year-old Sam Greenfield (Eva Noblezada), who, despite her large portfolio of rotten luck, is determined to help her friend Hazel (Adelynn Spoon) find the forever home Sam never did. So, when Sam finds, and then loses, a lucky penny that leads her to an enigmatic, talking black cat named Bob (Simon Pegg), Sam chases after the feline only to wander into the never-before-seen Land of Luck, a beautiful and extraordinary place where luck is made, inhabited by all manner of magical creatures.

Produced byApple Original Films, and showcasing an all-star voice cast that includes Whoopi Goldberg and Jane Fonda, Skydance’s Luck, according to Holmes, despite its title, is a story about love. But we digress.

When the famous choreographer and Emmy Award-winning filmmaker was asked to direct Skydance Animation’s first feature film, there were two things that won her over when scanning through what had already been brainstormed for the film.

“There were two things that were already a part of the project: one was this idea that Sam, our lead character, is someone that grew up in the foster care system,” she explains. “Another thing was that there was a leprechaun!” Holmes, also known for directing Secret of the Wings, The Pirate Fairy, and The Little Mermaid: Ariel’s Beginning, continues, “I am Irish. Part Irish. But the leprechaun… I just saw this idea immediately. The first week I was on it, I saw the idea of taking this notion of a leprechaun and expanding it big into a magical world.”

But it was the family aspect – or Sam’s lack thereof – that drew Holmes to the film more than the luck of the Irish. “I come from a very big family,” she notes. “Family is the most important thing in my life. So, I could already feel and see this potential of having this wonderful, emotional story of a girl, the unluckiest girl in the world, a girl with no family, ultimately finding her forever family. That is really the heart of the story.”

“How we looked at the real bad luck in the story was this idea that, ‘You know what? Bad luck isn't all bad, because when I look back, this moment of bad luck led me to the best good luck I ever had,’ Holmes shares. “And in Sam's case, it's love. It led her to love.”

With an original screenplay by Kiel Murray (Cars, Cars 3), and Jon Aibel and Glenn Berger (Kung Fu Panda 2, Trolls), producing by John Lasseter, David Ellison, Dana Goldberg, and David Eisenmann, and editing by William (Bill) J. Caparella (Treasure Planet, Kung Fu Panda), Holmes assembled her team with the intent to create a film that would both entertain and inspire.

And entertain and inspire it does. Holmes’ expertise in choreography meant much of Sam’s stumbling and bumbling about as she bounces from one unlucky moment to another had the palpable, entertaining energy of dance.

“[In making this film] you have the artists, the story artists, and the animators who have these amazing ideas,” she says. “So, when you start to sort of put those things together and then you work with Bill, our editor, you get it to where it really feels like a dance number.”

Much of Luck’s story is not only told through its animation and dialogue, but also through character action and physical comedy – a perfect fit with Holmes’ knowledge of dance. According to Luck producer and Skydance Media CEO Ellison, Skydance Animation – most known for its recent animated short film Blush – was formed five years ago with the goal to “deliver timeless movies for global audiences of all ages,” and the team believes they’ve accomplished that with Luck.

“Because this is Skydance Animation's first feature film that we're sharing with the world, we wanted to be really entertaining,” says Holmes. “We wanted it to celebrate animation and all the things that are very, very special to the process of animation in storytelling. And we wanted to let people know what Skydance is all about. For Kiel and I, the hardest and the most important task for us was honoring the authenticity of that story and being able to tell it in a way that is positive and inspiring.”