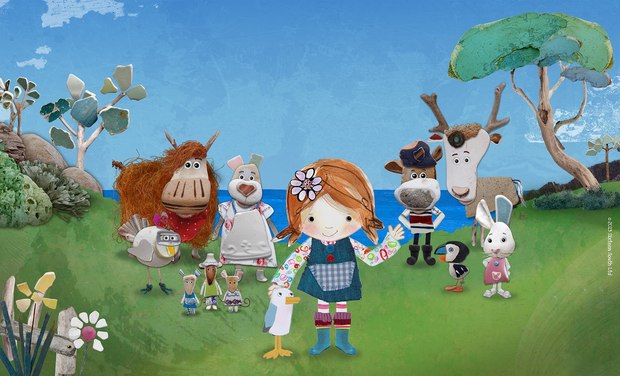 Set for transmission on Nick Jr. in May, Driftwood Bay (52 x 7 mins) produced by Northern Irish independent production company Sixteen South, is a pre-school animation series about a little girl who creates an imaginary world from treasures she finds washed up on the beach.

Lily (Orlagh O’Keefe) is a five year old who lives in a beach hut on the shore with her Dad (Dormer). Every day, the sea washes up a curious new treasure, which sparks Lily’s imagination about what might be happening ‘across the way on Driftwood Bay’.  And so, with her best friend Gull - the clever seagull (Paul Currie), an adventure begins as they head off to Driftwood Bay – and its cast of colourful inhabitants.

There’s Salty Dog (Mullan), the jolly seafaring sailor with a story for every occasion; Nonna Dog (Crosbie), a sage granny who runs Cockle Café and who’s always ready with some advice and a biscuit; Hatsie Hen (Empson), a train-driving hen with a need for speed and a love of excitement; Bull (O’Hanlon), a boisterous bull who always charges head first into things (sometimes literally); Wee Rabbit (Horrocks), a gentle young bunny with a love of art, fairy tales and rainbows; and Lord Stag (Fry) an aristocratic deer with a taste for the finer things in life.

“Never in my wildest dreams did I imagine attracting a cast of this magnitude to Driftwood Bay,” says producer Colin Williams from Sixteen South. “These incredibly talented people have taken our characters off the page and made them come alive in the most wonderful, creative way”.

Adds Tim Patterson, VP Director of Programming, Nickelodeon UK and Ireland, “Driftwood Bay is completely different in look and feel to any other pre-school properties around at the moment.  With its distinctive visual appeal and wonderful, warm characters we think it will quickly become a firm favourite with our young viewers and their parents”.

Actor Peter Mullan says, “Any actor would give his right arm to be doing a series like Driftwood Bay. It’s sweet, innovative, funny and gentle with a good heart and a great sense of collective responsibility. I’ve never done any voice work on animation so I thought this was a nice chance to do something that my children can actually see me in for a change!”

A unique series about making fun and adventure from things that you find, Driftwood Bay was created by Sixteen South, based on an original idea from artist Joanne Carmichael, and featuring characters and environments completely created from objects found washed up on the beach.

The series is set to air in May on Nick Jr. and will also air on RTE in Ireland, Sprout in US, ABC Australia, Kika in Germany, MTV in Finland, NRK in Norway, SVT in Sweden, and HOP! in Israel later this year.   Broadcasters in Australia and the US are keeping the original voices to the series.