Moves come on the heels of ‘Big Mouth’ and ‘Central Park’ creators’ decision to recast biracial characters with Black or biracial actors. 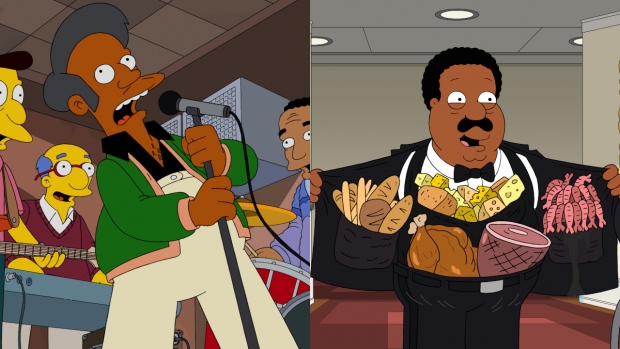 Following last week’s announcements by the creators of both Big Mouth and Central Park that they would be recasting biracial characters with Black or biracial actors, the producers of FOX’s long-running animated series, The Simpsons, have agreed to follow suit.

This past Friday, the show’s producers released a statement, saying, "Moving forward, The Simpsons will no longer have White actors voice non-White characters."

Earlier Friday, Mike Henry, who voices the role of Cleveland Brown on FOX’s animated adult comedy, Family Guy, announced via Twitter, that he would no longer voice the character, saying, “It’s been an honor to play Cleveland on Family Guy for 20 years.  I love this character, but persons of color should play characters of color.  Therefore, I will be stepping down from the role.”

This announcement came right after actor Jenny Slate, the voice of Missy on the show, requested the casting change, issuing the following statement on Instagram:

“I have come to the decision today that I can no longer play the character of ‘Missy’ on the animated TV show Big Mouth. At the start of the show, I reasoned with myself that it was permissible for me to play ‘Missy’ because her mom is Jewish and White – as am I. But ‘Missy’ is also Black, and Black characters on an animated show should be played by Black people. I acknowledge how my original reasoning was flawed, that it existed as an example of white privilege and unjust allowances made within a system of societal white supremacy, and that in me playing ‘Missing,’ I was engaging in an act of erasure of Black people. Ending my portrayal of ‘Missy’ is one step in a life-long process of uncovering racism in my actions.”

Slate went on to say, “I can’t change the past, but I can take accountability for my choices. I will continue to engage in meaningful anti-racist action, to be thoughtful about the messages in my work, to be curious and open to feedback, and to do my best to take responsibility for the ways that I am part of the problem. Most importantly, though, to anyone that I’ve hurt: I am so very sorry. Black voices must be heard. Black Lives Matter.”

In a statement similarly released last week on Twitter, Central Park series creator Loren Bouchard, who also created the Emmy Award-winning animated comedy, Bob’s Burgers, apologized for “getting this decision wrong, and for fumbling through a non-explanation in the press earlier this year” with regards to the casting of Kristen Bell as Molly on the Apple TV animated comedy. A statement he posted on behalf of the Central Park creative team of Bouchard, Josh Gad, Nora Smith, Halstead Sullivan and Sanjay Shah was as follows:

“Kristen Bell is an extraordinarily talented actress who joined the cast of Central Park from nearly the first day of the show’s development — before there was even a character for her to play — and she has since delivered a funny, heartfelt, and beautiful performance.

But after reflection, Kristen, along with the entire creative team, recognizes that the casting of the character of Molly is an opportunity to get representation right — to cast a Black or mixed race actress and give Molly a voice that resonates with all of the nuance and experiences of the character as we’ve drawn her.  Kristen will continue to be a part of the heart of the show in a new role but we will find a new actress to lend her voice to Molly.

We profoundly regret that we might have contributed to anyone’s feeling of exclusion or erasure.

Back in 2018, BoJack Horseman creator Raphael Bob-Waksburg, when questioned about his show’s “whitewashing” in casting Alison Brie as the voice of Diane Nguyen, a Vietnamese American woman, replied to the criticism openly, writing: “Short answer: I love my entire cast, but if I were doing it today, I would not cast the show (or any show) with all white people. I've really soured on the idea of ‘color-blind’ casting as an excuse to not pay attention.”

Also in 2018, responding to ongoing social media pressure as well as an online campaign by the advocacy group Color of Change, Walt Disney Animation Studios reanimated the character of Princess Tiana in Ralph Breaks the Internet, according to reports by the Wall Street Journal and The Glow Up. When reached by AWN, the studio offered no official statement or comment about the controversy or published reports detailing efforts to modify Tiana’s appearance in the film, which was release that November.

The Simpsons’ announcement comes after several years of resistance from show producers to criticism over Hank Azaria’s portrayal of Apu, the Indian owner of Springfield’s Kwik-E-Mart. Controversy grew with the 2017 release of the documentary, The Problem with Apu, produced by comedian Hari Kondabolu. The film features multiple interviews with people of Indian or South Asian descent who say they were bullied or mocked by others who cited the thick-accented convenience store owner. For many years, Apu was one of, if not the only, character of Indian ethnicity seen on American television. Azaria, who won four Emmy Awards voicing the characters, offered to step away from the role during a 2018 appearance on The Late Show with Stephen Colbert, before officially saying goodbye to Apu this past January.

Series creator Matt Groening and show producers responded to Kondabolu’s film, and the subsequent controversy, in their April 8, 2018 episode, “No Good Read Goes Unpunished.” In the episode, as Marge reads her favorite childhood book, “The Princess in the Garden” to Lisa, she realizes its quite more culturally offensive then she remembered. Reflecting on society’s increasing political correctness, Lisa looks at the camera and says, “Something that started decades ago and was applauded and inoffensive is now politically incorrect. What can you do?” She then looks over at a framed picture of Apu, which has the line “Don’t have a cow!” written on it.

In reporting Azaria finally stepping down from the role, AWN commented:

To some, the show’s response to the situation was yet further evidence of the producers’ arrogant laziness in refusing to properly address, or even recognize, the claim of systemic racism in the character of Apu. In fact, much of the current criticism directed at the ground-breaking series considers it far past its prime, mired in a tired style of humor that seems antiquated, stuck in a mindset formed 30 years ago, before many critics were even born. In a December Washington Post feature, “How ‘The Simpsons’ lost its edge,’” Phillip Lamarr Cunningham wrote about the episode, “The woeful response is indicative of what appears to be the show’s final descent from trenchant satire to tone-deaf mediocrity and reflects a loss of the self-awareness that made the series great.”

To others, the show’s response was yet further evidence of its brilliant satirical riffing on contemporary society, an attempt to examine ourselves by laughing at ourselves with humor aimed at people of all colors, gender, lifestyle choice, religious and political leanings. The controversy, they claim, is yet another example of society’s ongoing “politically correct” overreaction.

It should also be noted that roughly a year after the controversy reached its height in Spring 2018, The Simpsons franchise became yet another high-profile Disney property as part of the company’s $71.3 billion purchase of 21st Century Fox in 2019.