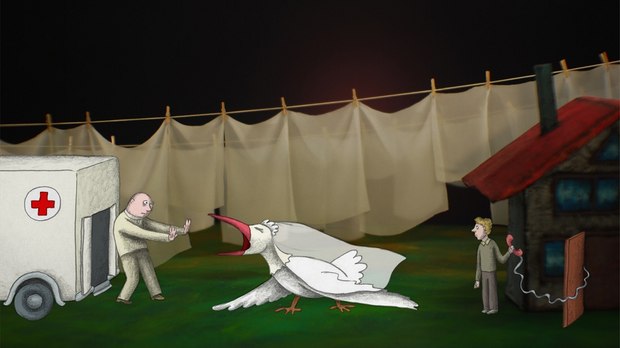 Latvia has nominated Signe Baumane's Rocks in My Pockets in the best foreign-language category at the Academy Awards, according to a report by The Hollywood Reporter.

Rocks in My Pockets had its world premiere at the 2014 Karlovy Vary Film Festival where, as the first animated feature ever to take part in the Karlovy Vary International Competition, it won the International Film Critics (FIPRESCI) Prize. The film reportedly won over the Latvian Oscar committee, which lauded its "international language, intimate story, and the director's courage to look at serious personal issues."

Handcrafted out of papier-mâché, stop-motion and classic hand-drawn animation by Latvian artist/filmmaker Signe Baumane, the deeply personal Rocks in My Pockets tells five fantastical tales based on upon the courageous women in her family, their battles with madness, and, in Signe’s words, “a casual Eastern European backdrop of war, divorce, politics, sex, business, education, money, secrets, marriage, power, motherhood and violence.”

Distributed in the U.S. by Zeitgeist Films, the film opened at the IFC Center in New York on September 5, and at the Laemmle Theaters in Los Angeles on September 12. The film will also play in Seattle, Houston, Boston, Vancouver, Chicago, and other cities over the next few months. Screening dates and additional information can be found at RocksInMyPocketsMovie.com.