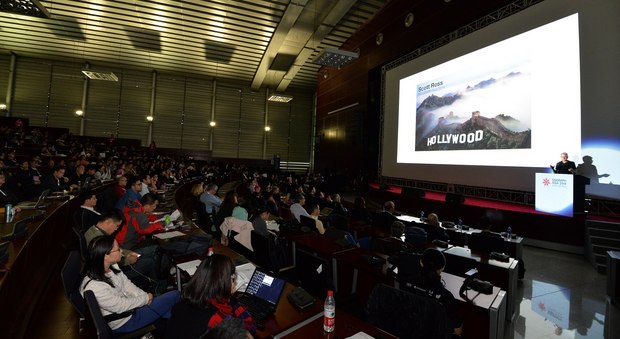 Over the four days from December 3-6, the Shenzhen Convention and Exhibition Center (SZCEC) was transformed into a hub of digital innovation as leading computer graphics and interactive techniques pioneers convened at SIGGRAPH Asia 2014. Now in its seventh year, the event which rotates around Asia-Pacific, attracted over 6,000 industry professionals, researchers, artists, developers and enthusiasts from 53 countries.

“Having successfully closed its seventh edition last Saturday, SIGGRAPH Asia has moved forward to further position itself as the leading computer graphics and interactive techniques conference and exhibition in Asia-Pacific,” said the SIGGRAPH Asia 2014 Conference Chair Professor Baoquan Chen, who is the dean of School of computer science and technology, Shandong University, and chief scientist of the visual computing research center at the Shenzhen institutes of advanced technology, Chinese Academy of Sciences. “It comes with great pleasure to see so many Chinese and international companies at this event. We have chosen Shenzhen as the starting point in Mainland China for SIGGRAPH Asia, as the region has an incredible amount of well-developed companies, and a large amount of good resources in the industry. Mainland China has seen rapid advances in creative design and entertainment industry. As a result, more opportunities have been created for our industry professionals both regionally and internationally”, he added.

The SIGGRAPH Asia conference featured exciting and informative sessions by Keynote Speakers, Scott Ross of Digital Domain and Steven Feiner of Columbia University, as well as other pioneering figures of the ever-evolving industry such as Peter J. Bentley, Digital Biologist and Robb Denovan of Pixar Animation Studios.

As a pioneer in the digital media and entertainment industry, Scott Ross has worn many hats throughout his career. As a co-founder of renowned Academy Award-winning digital production studio, Digital Domain, Mr. Ross’ commendable direction saw the studio receive Academy Awards for ground-breaking visual effects in Titanic, What Dreams May Come and The Curious Case of Benjamin Button, as well as several Academy Award nominations for numerous other films.

For his keynote speech at SIGGRAPH Asia 2014, Mr. Ross not only highlighted the fact that China will surpass the United States and become the world’s largest box office territory, but also examined which model China may adapt to gain influence in the global movie scene. In the past, various Asian countries, such as Japan, Korea, and India have tried different ways to participate in the studio production style that is present in Hollywood. The current Hollywood methods may act as a lesson for China and its love affair with the silver screen. Mr. Ross explained that, “China has great potential in becoming the next ‘Hollywood’ as the country has a large amount of resources, and has the ability of becoming the financial partner for international filmmakers. It may also be suggested that both China and the West could work together rather than be strictly guided by the studios.”

Professor of Computer Science at Columbia University, Steven Feiner directs the Computer Graphics and User Interfaces Laboratory and co-directs the Columbia Vision and Graphics Center. For over 20 years, Prof. Feiner’s laboratory has been engaged in Augmented Reality (AR) research. His research created the first outdoor mobile AR system using a see-through head-worn display, and pioneered experimental applications of AR to fields such as tourism, journalism, maintenance, and construction.

During the Keynote Speech at SIGGRAPH Asia, on the topic of “From See-Through to Be-Through: AR and the Future of User Interfaces”, Prof. Feiner generally talked about AR and its ability to change our lives. He discussed how AR could augment a world beyond our own first-person perspective, assist us as we work and play together, and create hybrid user interfaces for multiple display and interaction devices that complement each other. According to Prof. Feiner, “After over 45 years of research in labs around the world, AR eyewear is now poised to take its first steps toward mainstream use. In many applications, for this to be possible, AR eyewear will not only need to work well, but it will also need to look good, feel comfortable, and run for extended periods of time.”

The SIGGRAPH Asia 2014 Computer Animation Festival presented stunning animation and visual effects works. This year, it showcased the latest technologies and creative innovations for attendees, and thrilled with a variety of creative arts and technological advancements.

This year’s Best in Show Award was given to Bang Bang!, by Julien Bisaro of Caïmans Productions in France. Bang Bang! presents a dazzling visual narrative, further enhanced by a rapid pace that keeps viewers completely engaged from the start to its satisfying ending.

The Jury Special Prize was presented to James Cunningham of Media Design School (New Zealand), for his short film Over The Moon. The Best Student Project Prize was awarded to Jinxy Jenkins, Lucky Lou, by Michael Bidinger and Michelle Kwon of the Ringling College of Art and Design (United States).

“I would like to emphasize that there are quite a number of outstanding pieces that attracted the committee and jury's attention with intriguing visual designs and gripping narratives,” said Computer Animation Festival director Jinny HyeJin Choo.

“We were also delighted by the number of finalists who developed and created their submissions in Asia. It shows the growing focus on innovation and creative thought in the region, which is a wonderful development,” added Computer Animation Festival chair Robin King.

This year, the highly-revered platform for presenting the latest technical research findings on computer graphics and interactive techniques saw more papers with a focus on 3D printing, scene reconstruction, digital photography and video, alongside a range of other topics. The SIGGRAPH Asia 2014 Technical Papers program received a record-breaking 355 completed submissions. A total of 63 papers were accepted from over 16 countries and regions around the world.

In addition, a showcase of Emerging Technologies in the exhibition show-floor brought about much hype at the event with the hands-on demonstrations and installations focusing on virtual reality, augmented reality, robotics, wearable devices, 3D graphics, haptic devices and more. This program attracted 40 submissions, out of which 14 from Japan, Korea, Hong Kong and Singapore were accepted by the Emerging Technologies Committee. There was an on-site voting competition during the three-day exhibition; the Best Demo Award voted by Audience went to One-Man Orchestra: Conducting Smartphone Orchestra by Chun Kit Tsui, Chi Hei Law and Hongbo Fu from the City University of Hong Kong, while the Best Demo Award voted by Committee was awarded to Touch At A Distance: Simple Perception Aid Device With User’s Explorer Action by Junichi Akita from Kanazawa University, Tetsuo Ono from Hokkaido University and Kiyohide Ito and Makoto Okamoto from Future University Hakodate.

Following on from the continued success of SIGGRAPH Asia, Yoshifumi Kitamura -- from the Research Institute of Electrical Communication, Professor at Tohoku University, and the SIGGRAPH Asia 2015 Conference Chair -- shared his plans for next year’s event to move from Shenzhen to Kobe, Japan.

“I am thrilled to announce that next year’s SIGGRAPH Asia will be held in Japan after the successful first event in Mainland China,” Kitamura said. “This will be SIGGRAPH Asia’s second time in Japan. Japan has an incredible history of computer graphics innovation, creativity and mastery. As a preview, there will be 2 new Symposiums next year -- Symposium on Education and Symposium on Visualization in High Performance Computing. As a result, SIGGRAPH Asia 2015 will have the largest number of Programs in the history of SIGGRAPH Asia. I’m very excited about the opportunities for SIGGRAPH Asia 2015.”