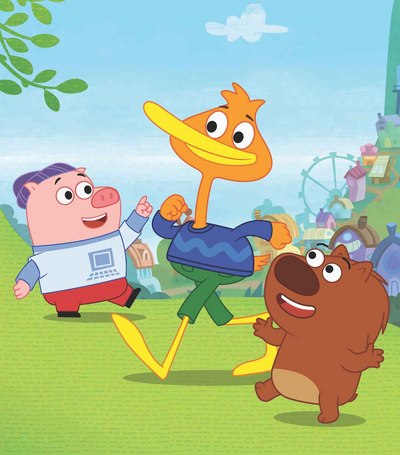 Shout! Factory announced that it has reached an agreement with Chinese family and children’s entertainment company, UYoung, to bring preschool series P. King Duckling to the home entertainment market in North America.

This new multi-year alliance provides Shout! Factory with exclusive home entertainment distribution rights (DVD and EST) in the U.S. and Canada for all 26 half-hour episodes of the first season of P. King Duckling. The company plans to roll out the series beginning in September 2017.

“We are thrilled to be partnering with UYoung in presenting P. King Duckling on home entertainment shelves,” says Melissa Boag, senior vice president of kids and family entertainment at Shout! Factory. “This special property, which encourages children to be creative and resourceful, brings meaningful entertainment value to the marketplace, and is a welcome addition to our slate of quality family entertainment.”

Clara Yang, general manager of UYoung said: “We are delighted to be working with Shout! Factory Kids. They have a strong presence in the home entertainment business, partner with some of the leading names in the IP business and have a great enthusiasm for P. King Duckling.”

Broadcast in the U.S. on Disney Junior, where the series enjoys high ratings, the new preschool comedy series has a learning-focused curriculum created by media specialist, Dr. Christine Ricci (Dora the Explorer), that centers on overcoming challenges and inspiring creative thinking.

In the series, P. King embarks on wild adventures with his two best friends Chumpkins and Wombat, who invariably experience challenges along the way.  But no matter what problems he faces P. King Duckling always remains positive and makes the best of every situation.