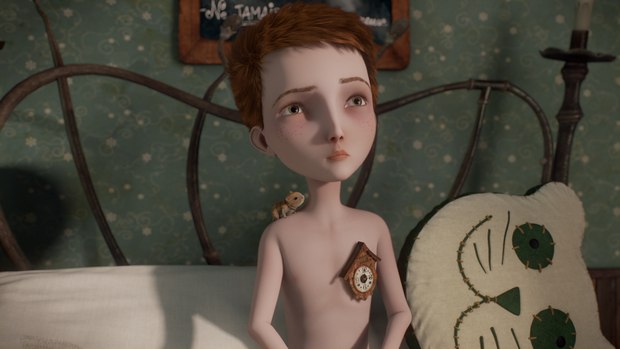 Los Angeles, CA -- Multi-platform entertainment company Shout! Factory, The Film Collective, Dada Films, and Brainstorm Media have announced a strategic collaboration to launch the popular French animated film Jack and the Cuckoo-Clock Heart, adapted by Mathias Malzieu from his own bestselling novel and the gold-selling album by his band Dionysos, and directed by Mathias Malzieu and Stéphane Berla. The film is produced by Virginie Besson-Silla and Luc Besson’s EuropaCorp.

The film will be released simultaneously in theaters and day-and-date on VOD Wednesday, September 24, 2014. The announcement was made by Shout! Factory’s founders Richard Foos, Bob Emmer, and Garson Foos.

In a second strategic collaboration, Shout! Factory has tapped The Film Collective and Dada Films to handle U.S theatrical distribution and Brainstorm Media for VOD for this film.

Jack and the Cuckoo-Clock Heart is a whimsical and visually opulent animated fairy tale set in an exciting period full of fabulous inventions, unforgettable characters, enchanting music, and fantastic adventures. This superbly animated movie about love and the acceptance of others will appeal to animation lovers looking for something a bit edgier and artistic.

“Jack and the Cuckoo-Clock Heart is an incredibly beautiful, unusual and artful film. We’re really proud to be involved in bringing this movie to the North American audience. It’s something that movie fans will enjoy – with an excellent original soundtrack as well,” said Garson Foos.

“We are delighted to again be working with the Shout! Factory team on Jack and The Cuckoo-Clock Heart,” stated Ruth Vitale and MJ Peckos.

"We love working with Shout! on their VOD and TV – their people, product, and marketing are amazing.  When they showed us this beautifully crafted film, we knew it had great potential – especially at Halloween!” said Meyer Shwarzstein.