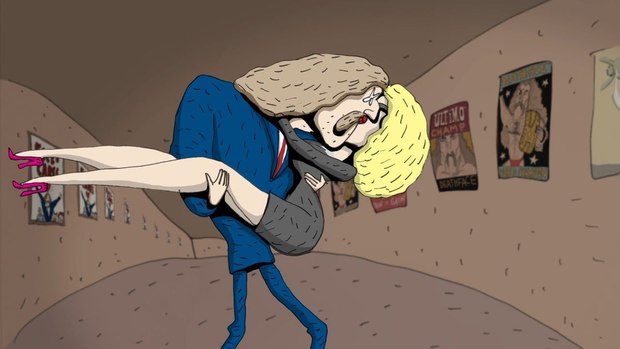 'Revengeance' is one of seven Bill Plympton feature films and more than 50 shorts that Shout! Factory will begin distributing across multiple plaforms later this year.

Shout! Factory has just announced they’ve acquired the library of prolific indie legend Bill Plympton, the famed cartoonist and animation director whose 40+ year career includes numerous awards as well as Oscar nominations for his shorts, Your Face and Guard Dog. The deal includes all seven Plympton feature films (The Tune, I Married a Strange Person!, Mutant Aliens, Hair High, Idiots and Angels, Cheatin’, and his latest, Revengeance)  as well as over 50 of his shorts. News of the deal comes from founders and CEOs Bob Emmer and Garson Foos, Jordan Fields, vice president of acquisitions at Shout! Factory, and on behalf of Bill Plympton, Catherine Branscome-Morrissey of New York sales agency Branscome International.

The deal provides Shout! Factory with digital and broadcast rights in North America for the library, and calls for the strategic launch of library titles across multiple entertainment platforms starting later this year.

With regards to the new deal, Plympton tells AWN, “I’m happy to partner with Shout! Factory and get my library of work in front of a much bigger audience. They have a history of supporting indie and avant-garde animation, and I’m excited to be working with them. It’s always great to have my films seen by new fans.”

“Today, there are so many buyers out there for animated content, which is great for filmmakers, especially those who own their content,” he continues. “I’ve always held on to ownership of all my films, which is finally starting to pay off. Hulu, Amazon, Netflix, HBO… it’s nice to see there’s financing behind the demand, which helps me a lot. The deal with Shout! Factory is really great.”

Laughing about his years creating animated content that was considered risqué, often “relegated” to midnight screenings and “Sick and Twisted” compilations, Plympton shares, “I can’t tell you how many times people told me, ‘Bill, go into kid’s animation! Do it for the children.’ I always said no, that I really enjoy doing these kinds of films. And I stuck to it.”

The director also shares that he’s working on a new feature film, which should be finished within the next two years. “The film is called Slide,” he reveals. “I’m about one-fifth into it. It’s a country western musical that takes place in the hills of Oregon. It’s something dear to my heart, something I grew up with and feels very purposeful.” Winner of the recent 2019 Webby Awards’ Best Animated Series for his satirical political series, Trump Bites, Plympton has also been honored over the years with the Cannes Film Festival’s Jury Prize and a number of Lifetime Achievement awards.  He began his career as an illustrator and nationally syndicated cartoonist, appearing in publications such as The New York
Times, The Village Voice, Rolling Stone and Penthouse, before making his first animated short, Boomtown, in 1983. Known for his “outrageous” content filled with sex and violence that he produced, distributed and promoted by himself, Plympton has been entertaining audiences since the days when such material was considered anything but mainstream. Plympton’s distinctive, hand-drawn 2D animation and gift for conveying the absurdist, off-center ridiculousness of everyday life has spanned from commercials and music videos to full-length animated features and animated shorts. He is widely revered in the animation community, earning himself a rabid fanbase and international acclaim as the “King of Indie Animation.”

“Bill Plympton is one of the most distinctive artists in the world” Fields noted. “His unique visual style and subversive sense of humor are a testament to the wickedly creative sensibility that has earned him both critical celebration and a rabid following. We are delighted to share his skewed vision of the world across our ever-growing distribution channels in the digital space.”

Branscome-Morrissey added “This deal is our dream come true. Shout! is a powerful fan-pleasing distributor – absolutely the best home in North America for the Plymptoons collection.”