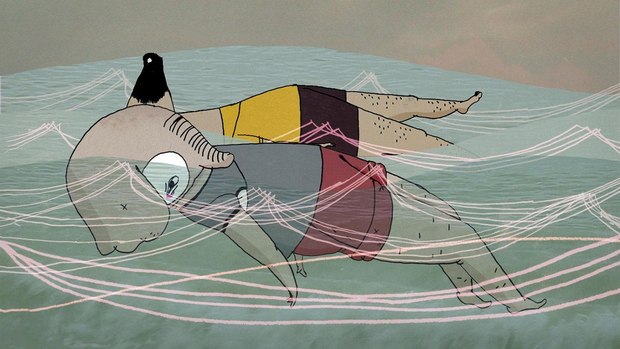 The Sundance Institute will be presenting Shorts Lab LA: Animation at the Japanese American National Museum in Los Angeles on Sunday, August 23 from 10:00 am to 6:00 pm.

Each Shorts Lab is a single day seminar. The full-day animation-only event will delve into the finer points of making animated short films, from concept and character development to various styles and techniques, as well as how to navigate the film festival circuit. The event consists of multiple panel discussions on stage between Short Film Programmers from the Sundance Film Festival and seasoned filmmakers. Each panel begins with moderated discussion and then finishes with 30-45 minutes of questions direct from the audience.

Tom Kenny is a writer, actor, stand-up comedian and voice actor. He and his wife Jill Talley were part of the cast on the legendary Mr. Show from 1995-1998. For animation, Kenny performs the voice for an incredible number of unique characters, most notably as the voice of SpongeBob SquarePants.

Kirsten Lepore is a director based in LA, whose films have taken top prizes at festivals around the world. She's worked with Google, MTV, Facebook, Whole Foods, Toyota, Nestle and most recently wrote and directed the first ever stop-motion episode of Cartoon Network's hit show Adventure Time. Her films have taken top prizes at SXSW, Slamdance, the Stuttgart Animation festival and many others.

Julia Pott is a British animator and illustrator based in Los Angeles, An alum of the Royal College of Art in 2011, she has created many works in advertising, music videos, television and her own films. Two of her short films have played at the Sundance Film Festival and around the world: Belly (2011) and The Event (2013).

David OReilly is an Irish-born filmmaker and artist based in Los Angeles. His animation work, including the short films Please Say Something and The External World, has garnered over 80 awards including Berlin’s Golden Bear, the Cartoon D’Or and awards at Sundance and the Venice Film Festival. He also created fictional video games in Spike Jonze’s Academy Award-winning film Her.