Running October 11-16, ‘Plymptoons Week’ will air on ShortsHD in the U.S. and on ShortsTV in the EMEA territories. 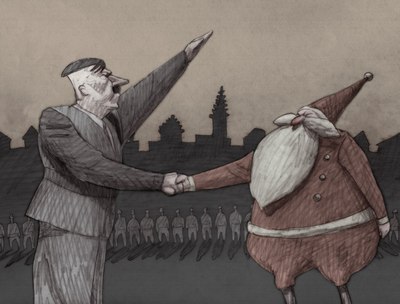 Next month Shorts International will be premiering a selection of Plympton’s work during Plymptoons Week. Running October 11-16, Plymptoons Week will air on ShortsHD in the U.S., and on ShortsTV in the EMEA territories, including Belgium, France, the Netherlands, Romania, Turkey, Finland, Slovenia, Serbia, Slovakia, Bosnia and Eastern Africa. In addition, iTunes and Amazon Instant Video will launch the entire catalogue globally later this year.

“For the last 20 years, I've been holding back my animation from the internet because I made more money from TV,” Plympton told AWN. “However, the deal with Shorts International is so spectacular that I took the internet plunge, and it feels so refreshing.”

Plympton’s catalogue of animated short films include The Cow Who Wanted To be A Hamburger, Horn Dog, Santa: The Fascist Years (voiced by Matthew Modine), Hot Dog, Shuteye Hotel, Guide Dog, The Fan and The Flower (featuring the voice of Paul Giamatti), Guard Dog, Parking, Eat, Can’t Drag Race With Jesus, Surprise Cinema, More Sex & Violence, The Exciting Life of A Tree, Sex & Violence, Plympmania, Boney D, Smell The Flowers, How To Make Love To A Woman, Nosehair, Faded Roads, Draw, Push Comes To Shove, The Wiseman, Dig My Do, Tango Schmango, Plymptoons, 25 Ways To Quit Smoking, How To Kiss, One of Those Days, Drawing Lesson #2, Love in The Fast Lane, Your Face, Boomtown and Lucas the Ear of Corn.

Plympton’s animated feature films include Idiots and Angels, Hair High, Mutant Aliens, I Married a Strange Person and The Tune. His most recent feature is Cheatin’, in which a newlywed wife proves the depth of her love by becoming her cheating husband’s mistresses.

A pioneer in the world of animation, Plympton has previously been nominated for two Oscars and has been recognized with numerous awards, including from the Annie Awards, the Cannes Film Festival and the Annecy International Animated Film Festival, among many others.