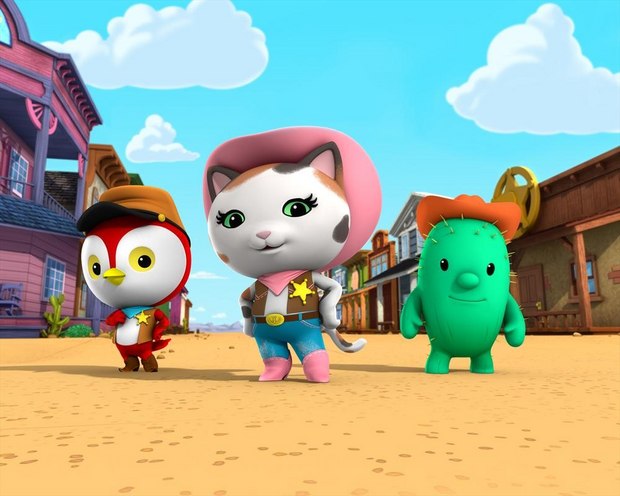 The vibrant, music-filled animated series, which utilizes folklore of the Old West to impart social skills and lessons for young kids age 2-7 about being a good friend and neighbor, forged new frontiers last month as the first Disney/ABC Television Group series to premiere multiple episodes online and on mobile devices before its on-air debut. Since its premiere, Sheriff Callie's Wild West ranks as the #1 most-watched series on WATCH Disney Junior. Five episodes have already been made available to verified viewers on WATCHDisneyJunior.com and the WATCH Disney Junior app for smartphones and tablets, with four more rolling out through January 7.

Set against a backdrop of the colorful Old West, Sheriff Callie's Wild West draws on the storytelling of that time period to highlight lessons about forgiveness, honesty and sharing. As with all Disney Junior programming, music plays a key role in the series, with each episode presenting two memorable original songs that highlight and enhance the story. With a thematic emphasis on country-western tunes, the series pays homage to classic Western films and cowboy musical revues with songs including “We're Gonna Clean up This Town” and “The Cowgirl Twirl.” An adorable trio of singing prairie dogs pops up to perform little ditties throughout each episode, emphasizing the lessons that are being introduced and providing a comedic transition between scenes.

Sheriff Callie's Wild West was created by Denis Morella and George Evelyn and developed for television by Holly Huckins, the team behind Disney's Higglytown Heroes. Morella, Evelyn and Huckins also serve as executive producers. The composers are Michael Turner and Mike Himelstein (Disney's Mickey Mouse Clubhouse). The series is a production of W!LDBRAIN Entertainment, a DHX Media company, in association with Disney Junior. It carries a TV-Y parental guideline.

Disney Junior reflects the emotional connection generations of consumers have to Disney storytelling and Disney characters, both classic and contemporary. It invites mom and dad to join their child in the Disney experience of magical, musical and heartfelt stories and characters, while incorporating specific learning and development themes designed for kids age 2-7. Disney Junior's series blend Disney's unparalleled storytelling and characters kids love deeply with learning, including early math, language skills, healthy eating and lifestyles, and social skills. In the U.S., Disney Junior is a daily programming block on Disney Channel and a 24-hour channel. There are 33 Disney Junior channels in 24 languages around the world.