CG feature tells the real-life story of the first dog promoted to sergeant in the U.S. Army for acts of bravery in World War I. 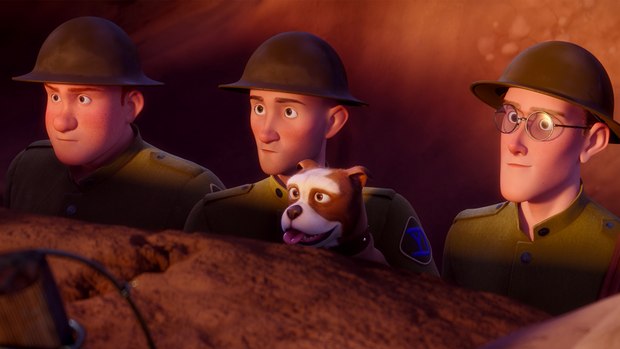 Stubby and his friends man the trenches on the Western front in 'Sgt Stubby: An American Hero.'

COLUMBUS, GA. -- Sgt. Stubby: An American Hero, opening April 13 in theaters across the United States and Canada, is a CG-animated feature based on the true story of the bond between a soldier and a stray canine that became the first dog promoted to the rank of sergeant in the U.S. Army.

The feature will play on about 3,000 screens and its release in 2018 commemorates the centennial of the United States’ role in World War I.

The movie tells the story of Army “doughboy” Robert Conroy (Lerman), whose life is forever changed when a little stray dog with a stubby tail wanders into a training camp in New Haven, Conn. Conroy gives his new friend a meal, a name, a family and the chance to embark on an adventure that would define a century. Narrated by Conroy’s sister Margaret (Bonham Carter), Stubby and his new best friend quickly find themselves in the trenches of France. Befriended by French poilu soldier Gaston Baptiste (Dépardieu), Stubby accompanies the duo along their epic journey through harsh conditions and incredible acts of courage. For valorous actions above and beyond his small stature, Stubby is recognized as the most decorated dog in history and the first dog promoted to the rank of sergeant in the U.S. Army, showing the world that the greatest heroes can come from the unlikeliest of places.

Featuring an original score by Patrick Doyle (Brave, Thor, Cinderella, Harry Potter and the Goblet of Fire), Sgt. Stubby is produced and distributed by Fun Academy Motion Pictures with animation by Mikros Animation, a Technicolor company.

Screenwriters are Lanni and Mike Stokey II (Band of Brothers, The Pacific, Alexander, Born on the Fourth of July), with editing by Mark Solomon (Frankenweenie, Chicken Run, Shark Tale, the upcoming Sherlock Gnomes). It is produced by Laurent Rodon and Emily Cantrill, and executive produced by Frank Lumpkin III, Tom Sheehan and Lanni.

As documented in history books but largely forgotten today, the true story of Sgt. Stubby will resonate with parents, educators, animal lovers, military supporters and history buffs alike. The film has been selected as an official project of the U.S. World War I Centennial Commission and its French counterpart, La Mission du Centenaire 1914-18; additional endorsements and educational partners include the Connecticut State Library, the National Infantry Museum Foundation, the National World War I Museum & Memorial and the Lowell Milken Center for Unsung Heroes.

Beyond his military exploits, Stubby’s status as an adopted stray has resulted in nearly a century of recognition by animal rescues and welfare organizations and Fun Academy has partnered with more than 70 regional and national animal organizations across all 50 states to shine a light on the human-animal bond and the amazing things adopted animals can do when given a chance in life.