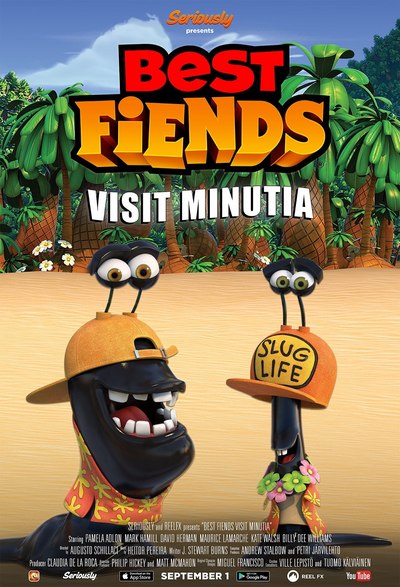 DALLAS, TX -- Helsinki, Finland-based mobile entertainment company Seriously has teamed up with Golden-Globe nominated studio Reel FX once again to launch a second original animated short from their Best Fiends franchise. Visit Minutia comes on the heels of the vast success of their debut short, Boot Camp, which took in over 6.4 million views and boosted profits for Seriously in the months following the launch.

The 3D animated comedic short takes viewers through the island of Minutia, the land of sun and fun, and follows the vacation follies of JoJo, Howie, Temper, Gordon and friends. Every attempt at relaxation and adventure is quickly thwarted by the hordes of slugs at every turn, packing the beaches, invading the buffet and generally spoiling any moment of leisure.

A specially created Visit Minutia event will also be available for players in the Best Fiends app, so that fans can both watch the animation and play their way through in-game content in the same style that extends the experience.

With the launch and success of their own original animated shorts, Seriously is broadening the Best Fiends franchise beyond mobile gaming and partnering with award-winning partners such as Reel FX to position the company as an entertainment brand on the rise. Additional shorts are slated to be released throughout the year, complemented with new in-game content.