Seven days of animation-focused talks, screenings, workshops and exhibitions brings together artists and business professionals from around the world for one of Asia’s most important and innovative industry events. 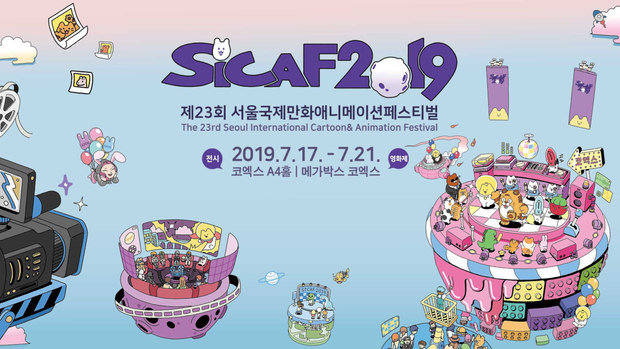 The Seoul Government has announced that Asia’s biggest international animation festival, SICAF 2019, will headline the upcoming Seoul Cartoon & Animation Week festivities scheduled to run July 15-21. Three separate organized and programmed events are planned, with audiences, artists and business professionals from around the world set to attend. In support of the weeklong festivities, the city of Seoul has focused the attention of its entire animation community to showcase the international appeal and economic foundation of Korea’s cartoon and animation industry.

According to Cho In-Dong, Director General of Seoul Innovation at Seoul Metropolitan Government, “The Seoul Cartoon & Animation Week is a festival that presents a snapshot of changes and trends happening right now in the international imagination industry. The festival will increase international awareness of the Korean cartoon and animation industry. We are committed to supporting it to be a successful event loved by everyone.”

The Seoul International Cartoon & Animation Festival (SICAF) is one of the industry’s most prestigious animation festivals, with this year’s competition showcasing 103 films from 28 countries; The Seoul Promotion Plan (SPP) is one of the biggest markets for animation and webtoon professionals in Asia, featuring more than 450 companies, including Netflix, that gather to engage in content production and distribution deal-making; and Seoul International Imagination Industry (Si3) is a creative conference where artists, producers, and entrepreneurs join together to discuss the present and future of the content industry. SICAF, which runs July 17-21, began in 1995 as a small, regional animation festival. Now in its 23rd year, SICAF has become one of the industry’s most prestigious animation festivals and the biggest international animation event in Asia. The theme for 2019’s festival is “Innovative Change.” This year, the 5-day event is being held at COEX A4 Hall and Megabox COEX. A total of 2,565 films from 93 countries were submitted to the festival; a diverse set of 103 films from 28 countries will compete across a number of different categories.

Opening the festival, in its Korean premiere, will be the highly acclaimed Korean 3D animated film, Red Shoes and the Seven Dwarfs. The comedy follows the story of Snow White, who is transformed into a beautiful princess by a pair of red shoes, and the seven dwarfs, who need a kiss from the world’s most beautiful women to undo their curse. Throughout the festival, 28 different family screenings are scheduled, including Hello Carbot, Titipo Titipo, Tayo the Little Bus, Dokdo Guards Sea Lion and Ann of Green Gables, as well as the thought-provoking Persepolis.

A cartoon and animation exhibition will also be organized alongside the screenings, presented in three parts: special, featured, and invitation. They will include a variety of fun content such as interviews with webtoonists, costume play performances, and booths of related companies.

Additional SICAF events are also scheduled, such as Masterclasses where you can learn from animation Masters, Dubbing Artist’s Day for fans of animation, and Singalong. Audiences ranging from animation enthusiasts, to families, to anyone who loves culture and art, are encouraged to take part.

Tickets can be purchased via Naver or Interpark and all screenings will take place in Megabox COEX. SPP, which runs July 15-17 at the Millennium Seoul Hilton, has four sections. In Biz Matching, buyers and sellers are matched to induce business collaboration and investment. Asia New Direction will bring together major media companies throughout Asia to discuss the future of the animation industry, with an eye towards strategies for expanding and energizing Asian company participation in the international animation business. At the Conference, the most important and timely issues from key content industries will be discussed. And, Ignite will feature a series of business presentations from Korean media and production companies.

Major global buyers set to attend the Biz Matching and interact with Korean content providers include Netflix, Disney, Nickelodeon, and Youku. Many content providers in Korea are excited as Netflix, the number one global OTT platform, has officially announced its participation in SPP.

Si3 is Korea’s biggest meeting place for cartoons, webtoons, and animation that shows a glimpse of both the present and the future of the content industry, with overviews of industrial, artistic, and technical aspects. The event runs July 19-20 at Dongdaemun Design Plaza.

Under the theme of “Age of Discovery: Tolerance for the New Renaissance,” Animation World Network co-founder Dan Sarto and OLM Digital executive director Ken Anjyo will deliver keynote speeches. OLM Digital is best known for computer graphic works on Pokemon and Yo-kai Watch. David Christensen, executive producer from the National Film Board of Canada, will lead an interesting policy roundtable. The NFB is considered a leading example of best practices in the state-led visual entertainment industry.

20 speakers from 8 countries are joining the forum, including writers, professors and businessmen from different fields. Animators from Disney - Pixar and other studios will lead various workshops including:

The forum will also feature a behind-the-scenes story of the Oscar-nominated animated short film, The Dam Keeper, a huge international film festival favorite that was also featured on several major news media sites including CNN. The film was written and produced by Tonko House co-founders and former Pixar art directors, Daisuke “Dice” Tsutsumi and Robert Kondo. The film tells an emotional story about environmental problems and school bullying.