In first year, $42 million in financial support has gone to more than 600 recipients for their projects using Unreal Engine, 3D graphics tools and open source software. 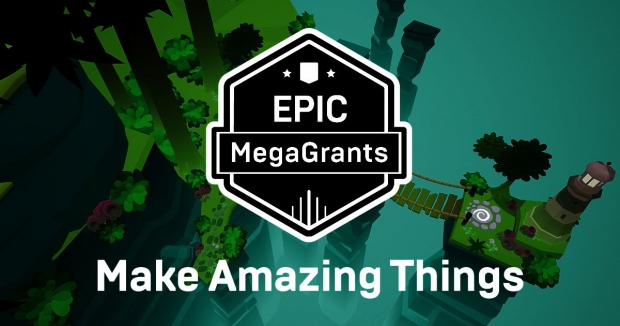 Epic Games’ support for a new generation of creative voices, through their Epic MegaGrants program, has been nothing short of… epic! This morning, they’ve revealed an “update” of the program’s efforts, which in just over one year, has seen over $42 million in financial support provided to more than 600 recipients. Epic MegaGrants is a $100 million program to globally accelerate the work of talented teams and individuals working with Unreal Engine, 3D graphics tools, and open source software.

Here's a sizzle reel of recent recipients; below you’ll find trailers and links to updates on 16 projects from all corners of the CG world. You can find a complete list of Epic MegaGrant projects here.

The program’s first grant round involved more that 200 recipients, surpassing the four-year distributed total of the initiative’s predecessor, Unreal Dev Grants, in only eight months.

Epic also announced that AMD is supporting the Epic MegaGrants program by contributing 200 AMD Ryzen 7 3800X desktop processors to be given to new and existing recipients. There is no deadline to apply, and hardware is available on a first-come first-served basis, based on project merit. Creators across games, entertainment, architecture, and many other industries are encouraged to apply now via online submission for an AMD Ryzen 7 3800X desktop processor.

“AMD is excited to contribute to the Epic MegaGrants program by leveraging the power of 3rd Gen Ryzen desktop processors for content creators around the world,” said Ritche Corpus, senior director of ISV gaming and software at AMD. “3rd Gen AMD Ryzen processors set a new standard in content creation with award-winning performance and features. We are excited to see what new levels of creativity and productivity will be unlocked with the AMD Ryzen 7 3800X.”

In April 2019, Magic Leap pledged their support of Epic MegaGrants by providing both cash assistance and gear; 66 recipients have already received Magic Leap 1 devices to date, with a total of 129 devices reserved for distribution. Developers building Unreal Engine spatial computing applications across entertainment, architecture, automotive, healthcare and many other industries can apply via online submission to receive Magic Leap hardware.

Here is a short selection of innovative projects that benefited from this round of MegaGrants:

From Colombia-based On3D Studios, D.A.N.G.E.R. Team. is a stylized action game where the player controls a team of three uniquely-capable spies. Experience the game’s secrets, gadgets, explosions, absurd situations, and unforgettable villains alone or with a partner via co-op.

From Afterburner Studios, a three-person team of ex-AAA developers, comes Dreamscaper—a roguelite action RPG about lucid dreaming. Play as Cassidy, dive into her subconscious, and use lucid powers to take on the surreal nightmares she wrestles with in order to save her from a dark fate. Dreamscaper is coming to Steam Early Access in August 2020.

Journey into the winding city dieselpunk streets of F.I.S.T., an action-focused Metroidvania title from Shanghai-based TiGames. Explore, solve puzzles, uncover secrets, and take on a robot army with your giant fist, alongside a cast of charming characters.

Hundred Days puts you in charge of managing a small and abandoned winery, from selecting the types of vines you want to grow, to naming your final product. Take care of your vineyard, learn to follow the rhythm of the seasons, harvest, label your bottles, and sell them on the market—every choice you make will have an impact on the quality and quantity of the wine you produce and sell.

INDEPENDENT GAME: Slice Back Up by Atomic Kraken Ltd - Website

With a stunning neo pixel art style, Slice Back is a hilarious side-scrolling hack and slashimi game with action that’s as sharp as a sword. Enjoy aerial combat that’s spicier than wasabi, feed on aliens to get new superpowers and, eventually, (spoiler alert) save planet Earth. Grab your soy sauce and get ready for a taste of Slice Back!

PureWeb’s self-service and fully-managed high capacity cloud platform will provide users with the tools necessary to easily build, publish, and manage their pixel streaming applications for web and mobile-based users. This toolset will include features such as an Unreal Editor plugin for easily packaging and uploading projects onto the PureWeb platform, as well as a web dashboard for scheduling deployments to different global regions and monitoring capacity and usage.

Generating infinite amounts of synthetic data for AI models and providing highly realistic environments for intelligent agents to acquire experience—Simbotic AI is a modern 3D simulation engine and AI platform designed to bridge the reality gap between simulation and the real-world.

DeepMotion's VR Avatar Tracking solution brings to life realistic full-body motion and interaction with as little as 2 or 3 trackers. Motion Brain, which uses the latest in AI and physics simulation, we are able to generate a full-body avatar that moves with you and interacts naturally with its virtual environment, providing a rich sense of physical presence and embodiment. VR Avatar Tracking simulates full-body motion using inverse dynamics and obeys biomechanical joint limits, instead of a simple approximation provided by inverse kinematics. VR Avatar Tracking runs on Windows and Mobile platforms, with your choice of VR hardware. With DeepMotion's motion intelligence solutions your characters will move as real as they look in Unreal Engine 4.

Learn, understand, and master python scripting for the Unreal Engine with this step by step guide, complete with real-world production samples.

Beyond the Stars is an education program that combines interactive storytelling, health research, and school curriculum to inspire children to adopt healthy living habits while considering the impact their actions have on the environment. In the story, children embark on a journey to reclaim the lost knowledge of the Pacific that holds the key to restoring health and happiness to the land.

ScienceVR asks, what if we could see the “invisible forces” around magnets? This experience empowers VR learners to see the “math” around magnets. Users can take their time to try repeatedly to build up their understanding and interact with virtual scientists.