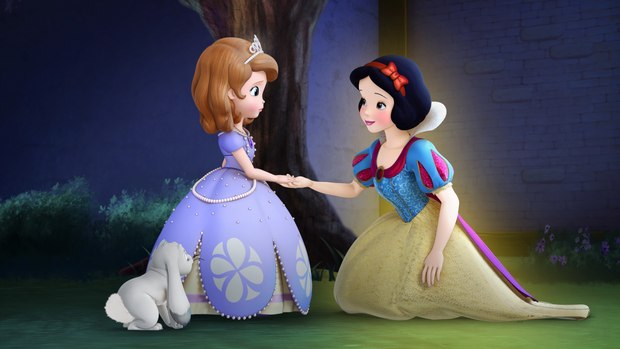 The new season includes appearances by Disney Princesses Mulan (voiced by Ming-Na Wen), Tiana (voiced by Disney Legend Anika Noni Rose) and Rapunzel (voiced by Mandy Moore). The guest voice cast for season two includes Alyson Hannigan (How I Met Your Mother) as a young faun who always felt she wasn't special enough; Ginnifer Goodwin (Once Upon A Time) as the castle's kitchen maid who aspires to be an inventor; Melissa Rauch (The Big Bang Theory) as Ruby's fairy godmother; Anna Camp and John Michael Higgins (both of Pitch Perfect) as a charmingly sinister princess and a tall fire-breathing dragon; Isla Fisher (The Great Gatsby) and Sean Astin (Lord of the Rings) as two adventurous young sprites; Nick Offerman (Parks and Recreation) as a well-connected fox who reigns over Enchancia's woodland creatures; Robert Morse (Mad Men) as an elderly retired sorcerer; Christian Borle (Smash) as an ambitious, young castle steward out to take Baileywick's job; Oliver Platt (The West Wing") as a sickly old dragon; Tracey Ullman (The Tracey Ullman Show) as a happily wicked witch; and Phylicia Rashad (The Cosby Show) as a cranky ice witch who eventually allows her heart to be melted by the power of music.

Created for kids 2-7 and their parents/caregivers, Sofia the First tells the story of an ordinary girl who becomes a princess and, throughout her journey, learns that possessing the characteristics of a true princess – honesty, loyalty, compassion and grace – is what makes one truly royal. The series stars the voices of Ariel Winter as Sofia, Sara Ramirez as Queen Miranda, Wayne Brady as Clover, Tim Gunn as Baileywick, Darcy Rose Byrnes as Amber, Zach Callison and Tyler Merna as James, Travis Willingham as King Roland II, and Jess Harnell as Cedric. Recurring guest stars include Eric Stonestreet, Ellie Kemper, Viola Davis and Bonnie Hunt.

In the season two premiere episode, "Two Princesses and a Baby," Amber asks royal sorcerer Cedric to cast a magic spell that will give her and twin James separate birthdays so that she can celebrate the day all by herself. After the spell accidentally turns James into a baby, Sofia helps Amber realize how special it is to have a twin, and then they work together to help Cedric reverse his spell. The episode features the songs "Sisters and Brothers" performed by Sofia and "Two By Two" performed by Amber.

Then, in "The Enchanted Feast," Snow White appears to help Sofia learn the importance of trusting one's instincts after she suspects that a visiting sorceress is not who she says she is. Snow White is voiced by Katie Von Till and Megan Mullally (Will and Grace) recurs in the episode as Miss Nettle, an evil fairy who disguises herself as a powerful sorceress to attempt to steal Sofia's magical amulet.