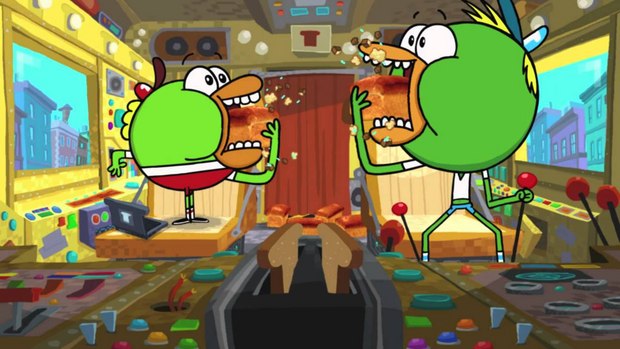 Nickelodeon treats viewers to an all-new night of animated premieres beginning this Sunday, April 5, with the launch of Breadwinners season two at 6:00 p.m. (ET/PT). In “Adventures of Big Baby Bun Sitting,” SwaySway and Buhdeuce babysit Big Baby Buns, but a sudden growth spurt makes the task even more challenging.  Then in “Crumbskull,” the guys accidentally feed Ketta Dunce Bread just when her smartness is needed to save the planet.

After an encore episode of SpongeBob SquarePants, the premiere line-up continues when Nickelodeon’s newest animated series Harvey Beaks hits in its regular timeslot at 7:00 p.m. (ET/PT). In, “The Finger,” the discovery of a giant, stone finger in the ground leads the kids on a passionate quest to find out what’s attached to the rest of it. Then in “The Negatives of Being Positively Charged,” when Fee and Foo become magnetized, nature seems determined to force them apart. But a life without each other simply won’t do.

A brand-new episode of Sanjay and Craig rounds out the premiere block at 7:30 p.m. (ET/PT).  In “Fowl Work,” when Sanjay and Craig get the once-in-a-lifetime opportunity to work at the Frycade, they soon discover Belle’s secret life.  Next in “Rash Thrash,” Sanjay develops an allergy to Craig—could this mean the end of the dude-snake duo?