Everyone’s favorite maladjusted park rangers are back for more adventures when ‘Brickleberry’ returns for a third season on Tuesday, September 16 on Comedy Central. 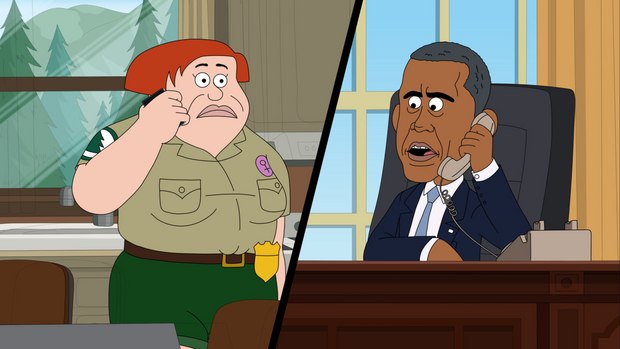 In the premiere episode, “Obamascare,” President Obama visits Brickleberry to honor Woody’s 30 years of perfect attendance as a park ranger and true to Brickleberry form, pandemonium ensues. After Woody is accidentally shot, Steve volunteers to be part of a very unique solution, and Bobby Possumcods (O’Guin), angered by Obamacare policies, creates his own backwoods healthcare plan. The President’s looming arrival leaves the remaining park rangers on edge, particularly Connie, who claims to have a past with the Commander in Chief.

Brickleberry follows the hapless rangers at Brickleberry National Park as they do their worst to keep the park open. Having been through everything from Steve’s invention of Squabbits to the birth of the anti-Christ, the rangers are back and ready for anything. Brickleberry voice talent includes Natasha Leggero as Ethel, Tom Kenny as Woody, Dave Herman as Steve, Jerry Minor as Denzel, Black as Connie, and Tosh as Malloy, the resident bear cub. Ian Friedman and Adam Londy are the Executives in Charge of Production for Comedy Central.

New episodes of Brickleberry will be available the day after air in the Comedy Central App, and select episodes from season two are available with no authentication required for viewers that want to catch up on the best of last season. The entire first and second seasons are now available on Hulu Plus.