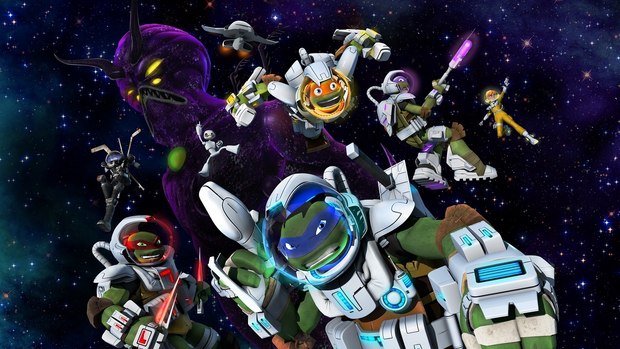 Moderated by Andre Meadows (Black Nerd Comedy), it was revealed that new villains and voice talent will debut in the epic fourth season, including: Keith David (There’s Something About Mary) as Sal Commander; Dwight Schultz (A-Team) as Wyrm; and Pat Fraley as Krang (voice from the ‘80s series).

These voice actors add to the list of previously announced guest stars: David Tennant as Fugitoid, a former alien scientist named Dr. Honeycutt, whose brain is saved and placed into the body of a robot when his body gets destroyed.; Peter Stormare as Lord Dregg, an arrogant, insectoid crime lord; Michael Dorn as Captain Mozar, the supreme Commander of the Triceraton Fleet; Lance Henriksen as Zog, a scout for the alien Triceraton army; Ron Perlman as Armaggon, a vicious, bounty-hunter robo-shark with a taste for turtle; and Zelda Williams as fan-favorite Mona Lisa, a highly skilled Salamandrian warrior.

During the 26-episode season, the half-shell heroes will embark on their most epic adventure yet – outer space! The Turtles, joined by a cyborg known as Fugitoid, hurdle though space meeting strange and bizarre alien creatures and combat galactic monsters all in a race against time to save planet Earth.