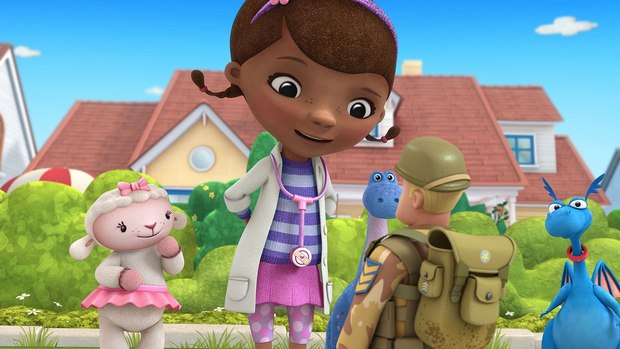 BURBANK, CA -- “McStuffins Toy Hospital” will mark season four of Disney Junior's award-winning animated series Doc McStuffins, premiering Friday, July 29, on Disney Junior (9:00-10:00 a.m. EDT) and Friday, July 22, on the Disney Junior App. On Saturday, August 6, the first-ever museum exhibit dedicated to Doc McStuffins will open at the world's largest children's museum, The Children's Museum of Indianapolis. The interactive experience, inviting kids and families to explore and learn about healthy habits, compassion and nurturing care, will travel to other venues across the country beginning in 2017.

Anthony Anderson (ABC's black-ish) and Dawnn Lewis (A Different World) guest star in the season premiere, "Welcome to McStuffinsville," in which Doc's grandmother transports Doc to the magical world of McStuffinsville where she will carry on a family tradition by expanding her practice to the McStuffins Toy Hospital. There, on her first day as chief resident, Doc must tend to Stanley, a lonely, brokenhearted toy.

The series, which debuted in 2012, was honored with a prestigious Peabody Award (2015) recognizing outstanding storytelling in electronic media, and NAACP Image Awards (2016, 2015) for Outstanding Children's Program.

Created and executive-produced by Humanitas Prize and Emmy Award-winning Chris Nee and directed by Emmy-winning Norton Virgien, Doc McStuffins follows the story of six-year-old Doc who can talk to and heal stuffed animals and toys. Through Doc and her toys, the series models good health practices, while imparting to young viewers the importance of taking care of oneself and others.

Doc McStuffins is a production of Dublin, Ireland's Brown Bag Films in association with Disney Channel. The Hollywood Health & Society division of the USC Annenberg Norman Lear Center serves as its health and medical consultants, advising on basic health issues that are relevant to young kids and families. The series airs daily on Disney Channel and Disney Junior.