Geena Davis guest stars as Huntara in six new episodes that find Adora embarking on a journey of discovery to the desolate Crimson Waste, as the fate of Etheria hangs in the balance. 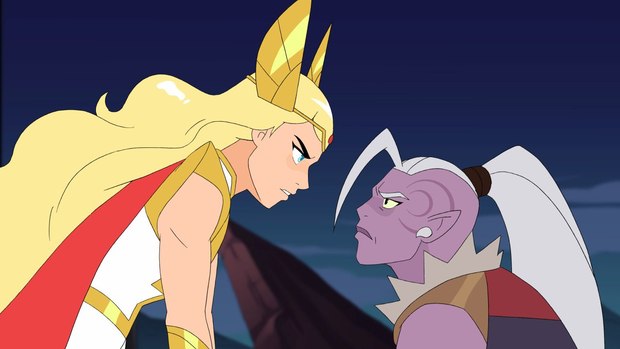 Geena Davis guest stars as Huntara in the just launched Season 3 of DreamWorks 'She-Ra and the Princesses of Power.' (L-R) She-Ra and Huntara.

DreamWorks She-Ra and the Princesses of Power tells the story of an orphan named Adora, who leaves behind her former life in the evil Horde when she discovers a magic sword that transforms her into the mythical warrior princess She-Ra. Along the way, she finds a new family in the Rebellion as she unites a group of magical princesses in the ultimate fight against evil.

New this season is Oscar-winner Geena Davis, who stars as a tough fighter named Huntara. Season 3 finds Adora learning that many things in her past are not what they seem, leading her to embark on a journey of discovery to the desolate Crimson Waste where she meets Huntara. Punished by Hordak for Shadow Weaver’s escape, Catra and Scorpia also find themselves sent to this land of cutthroats and criminals on a mission to aid Hordak and Entrapta’s master plan. Feeling pushed aside, Catra will stop at nothing to bring Adora and the Princess Alliance down as the fate of Etheria hangs in the balance.