Stop motion holiday special from Warner Bros. Animation combines the humor and spirit of both the beloved 2003 holiday film and the hit Broadway production. 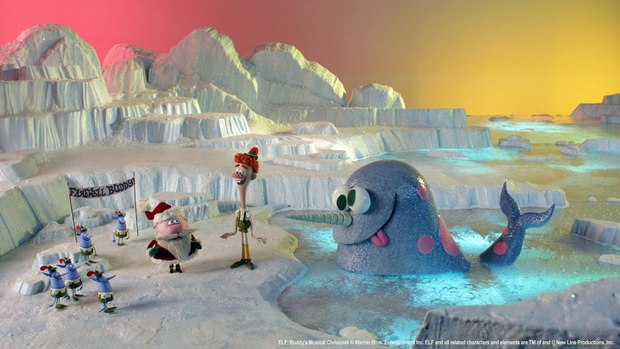 Marking the biggest project in the eleven-year history of Screen Novelties, the special -- an irreverent mashup of the beloved feature film Elf and the hit Broadway show Elf: The Musical -- will air on NBC on Tuesday, December 16, at 8 p.m.

Starring the voice talents of four-time Emmy Award winner Jim Parsons (The Big Bang Theory) as Buddy, Elf: Buddy’s Musical Christmas combines the humor and spirit of both the beloved 2003 holiday film, which drew glowing reviews and earned $173 million at the domestic box office, along with the hit Broadway production.

Located in Los Angeles’s Echo Park, Screen Novelties was founded in 2003. Company projects for such clients as Nickelodeon, Cartoon Network, Disney, Hallmark, Fox and Paramount have included the opening for the It’s a SpongeBob Christmas special, end titles for Sony’s Cloudy with a Chance of Meatballs 2, The Flintstones: On the Rocks, the sock-puppet Flight parody created for the 2013 Oscars, and a special restoration of Ray Harryhausen’s legendary short animated film, The Tortoise and the Hare. “This was a very intense and amazing project for us, as we had a very talented crew working very hard to make this project look its very best,” Caballero said. “But we also had a great deal of fun here because it was such a lighthearted and absurd story. We enjoyed creating these stylized Elf characters, each with his or her own personal style, to help get the story across in a simple, whimsical way.”

Working from a script provided by Warner Bros. Animation, the Screen Novelties team broke down the script, created storyboards and planned the animation prior to building the puppets and sets that would be featured within Elf: Buddy’s Musical Christmas.

“When we are working with puppets, we, as animators, get to become the ‘actors’ ourselves,” says Walsh. “We are in control of the expressions, emotions and dynamism of the puppet characters as they perform in each scene of the show. We like to think that our approach to stop motion animation is engaging and presents a lot of personality, spirit and heart. We’ve learned that you don’t need a zillion dollars to do something funny!”

With a crew of nearly 50 artists and other production members, Screen Novelties shot the show frame-by-frame over the course of four months, producing a wonderfully charming and handmade miniature world. Multiple exact copies of each puppet were created to allow concurrent shooting on multiple environments and stages.

“We’re a versatile shop that can handle a broad range of styles, whether it be for a TV show, commercial or feature film,” Finnegan adds. “But we get most excited when people approach us for our ‘house style.’ We like to think we have a signature look and feel to our animation.”