Short film directed and animated by motion504 creative director Scott Wenner is part of a stylish series of videos featuring motion work based on narratives from the paper’s ‘Modern Love’ column. 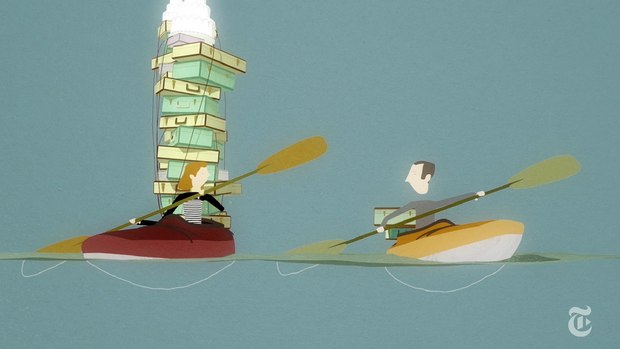 Love can take many forms, as fans of the New York Times’ “Modern Love” column know, so for motion504 Creative Director Scott Wenner, the challenge was bringing the particulars of one couple’s romantic story to life.

The column, which details the joys and tribulations of couples, has been a mainstay at The New York Times, but last year, as part of a broader effort to ramp up video content, The Grey Lady began commissioning lovely, stylish motion work based on the narratives from the column. Since then, an array of top-notch and award-winning motion graphic artists have created work for the column.

Wenner was offered the chance to participate when he reached out to series producer, Zena Barakat, after a “Modern Love” video by animator Joe Donaldson caught his eye. “I’m a huge fan of his work in general and the piece kind of compelled me to investigate the series a little further,” Wenner says.

Wenner was assigned “Together We Stand,” the story of Adam, who is in a wheelchair, and Anna, his able-bodied girlfriend. Set to three minutes of audio of the couple discussing the details of their relationship, including their backgrounds, how they met, and the challenges they face together, the director and animator set out to find unexpected ways of complementing the voiceover instead of just illustrating it. For Wenner, the biggest challenge for the project was that the Times gave him complete creative freedom.

“It’s something you always think you want, until someone gives it to you,” says Wenner. “It forces you to make a commitment to a concept and character designs really quickly. And you know that given the deadline, there is no turning back.”

Wenner spent time working on many different styles, including a photorealistic one, before the final version of the cut-down audio, and a tight turnaround, gave him clarity on what would work best: a sleek, minimalist approach.

With gentle, relatable features given to the characters and soft, warm colors making up the backgrounds, the animation is inviting, and once the first reveal comes -- that Adam is in a wheelchair and that is why Anna must change the lightbulbs and kill the spiders -- we’re hooked on the story. From there, Wenner ramps up the drama with a visual metaphor for the kayak-loving Anna, who is overwhelmed by the challenges of the relationship, feeling like she’s drowning and offering a glimpse at the chaos and destruction of the car wreck that put Adam in a wheelchair. But all is not grim. Wenner, whose goal from the beginning of the project was to incorporate some sense of playfulness and levity to a love story that had some heavy aspects to it, offers moments of comedy, including when Anna shyly says that she can’t disclose how sex works for a paraplegic without it getting “dirty,” so the animation shows us two wheelchairs, well... getting dirty.

“Adam and Anna both clearly had a good sense of humor, and I wanted to make sure that didn’t get lost,” says Wenner. “Ultimately, their story is about ups and downs, not just downs. So I tried to strike a balance.”

His favorite scene? Possibly the amorous wheelchairs, which he knows he took a risk including, but he felt the subjects, the Times and audiences would enjoy a moment of levity in this story. And he was right. “Everyone seems to like the humping wheelchairs,” he laughs.

Another challenge was making sure his work was on par with the standard set by some of the previous “Modern Love” animations.

“Working for the Times was a thrill for me, but it definitely adds some pressure to do your very best,” Wenner concludes. “You feel like you’re working for a very smart audience, and you want to live up to the extremely high storytelling standard of the rest of the paper.”