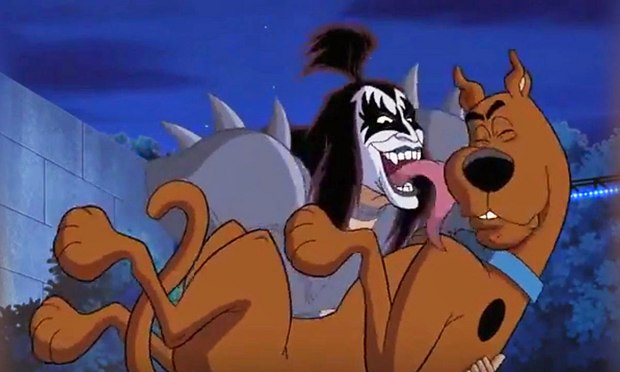 Burbank, CA -- KISS, one of the most popular rock bands of all time, takes center stage in the latest Scooby-Doo! full-length animated film, Scooby-Doo! And KISS: Rock and Roll Mystery, set for release by Warner Bros. Home Entertainment July 21, 2015. Starchild, Demon, Catman and Spaceman join everyone’s favorite teen sleuths in an explosive, new, must-see musical adventure no KISS Army member will want to miss! In Scooby-Doo! And KISS: Rock and Roll Mystery, the Mystery Inc. gang travels to KISS World, an amusement park dedicated to the band, for a special Halloween concert headlined by the legendary rock group.

Scooby-Doo! And KISS: Rock and Roll Mystery will be available early through EST for download July 10, 2015.

It’s a rockin’ good time for the Scooby-Doo gang…or is it? A major concert featuring the world-famous rock band KISS is in jeopardy and legions of KISS fans will be let down, unless Scooby-Doo and his pals solve a perplexing mystery that’s keeping concert goers from the venue where the band is to perform.

Daphne, who has an enormous crush on KISS member Starchild, masterminds a plan to see the band in concert by telling her Mystery Inc. pals they’ve been summoned to solve a mystery at KISS World, a spectacular amusement park themed after the popular musical group.

The highly anticipated sold out concert, which is taking place on Halloween night at KISS World, gets dangerously close to being cancelled for security reasons after park visitors are frightened away from the premises by the Crimson Witch. At KISS World the gang meets all four members of KISS, who agree to let Scooby, Shaggy, Fred, Daphne and Velma help them solve the mystery of the Crimson Witch. Together they embark on an unforgettable, rocking and rolling adventure. They discover that the Crimson Witch has come to KISS World to summon The Destroyer, an evil being from the alternate dimension of Kissteria! Together, the wicked duo’s ghastly plan is to destroy the earth! Can the gang’s cunning and KISS’s power of rock save the day?! Tune in to this rock and roll mystery for some thunderous, heavy FUN!

“We’ve brought together two giant pop culture icons, Scooby-Doo! and KISS for an unforgettable new story that’s sure to appeal to a wide range of viewers,” said Mary Ellen Thomas, Vice President Family & Animation Marketing. She added, “We’re excited about the release of Scooby-Doo! And KISS: Rock and Roll Mystery. KISS’s spectacular theatrics mixed with Scooby-Doo’s delightful antics create the perfect blend for an original new story. This film is pure fun. Adults will delight in seeing one of America’s greatest rock bands, KISS, presented in gorgeous animation and kids will be entertained by Scooby-Doo solving a rock and roll mystery with his pals.”