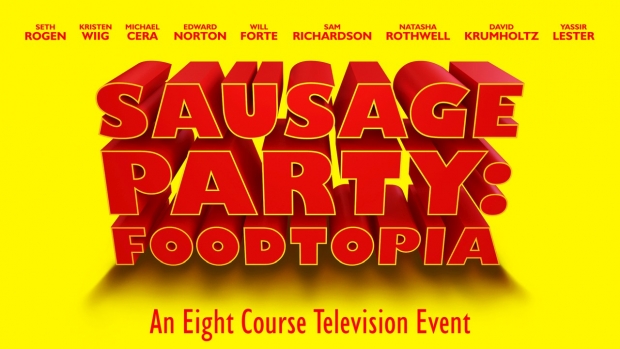 Prime Video has ordered Sausage Party: Foodtopia, an animated series based on the hit R-Rated 2016 animated feature film, slated to hit the streamer worldwide in 2024. The movie spinoff boasts the return of original cast members Seth Rogen, Kristen Wiig, Michael Cera, David Krumholtz, and Edward Norton, with Will Forte, Sam Richardson, Natasha Rothwell, and Yassir Lester joining the star-studded lineup. No plot details have been revealed for the new series, which is currently in production.

"Film used to be the superior art form to television, and we humbly reached the pinnacle of what can be achieved with film in our remarkable opus, Sausage Party,” shared co-writers Rogen and Evan Goldberg. “But now that film is completely dead, and TV is the forever king of entertainment, we’ve decided to continue the epic adventures of our culinary crew in the soon-to-be-legendary televised masterpiece Sausage Party: Foodtopia. It’s got all the heart, double the puns, and triple the food-on-food sex. In other words, it’s exactly what the world needs right now.”

“The original Sausage Party was an incredibly hilarious, outrageous, one-of-a-kind entry into the world of animation,” added Vernon Sanders, head of global television, Amazon Studios. “We are thrilled to collaborate again with Seth, Evan, and their team at Point Grey, as well as our partners at Annapurna Television and Sony Pictures Television, to offer a new look into this world that will be brought to life so vividly for our global Prime Video customers.”

“The original film was another irreverent comedy from the brilliant comedic minds of Seth and Evan,” said Sony Co-President Jason Clodfelter. “When Annapurna, Seth, and Evan approached us to wholly reboot the project as a TV series, we were thrilled to be a part of the collaboration and equally excited to have Prime Video as our partner. We look forward to the fanfare around Sausage Party: Foodtopia, which promises to be a hit.”