Contract workers at Vancouver-based Nitrogen Studios allege they were denied pay for overtime work, and, in many cases, denied credit for working on the film at all. 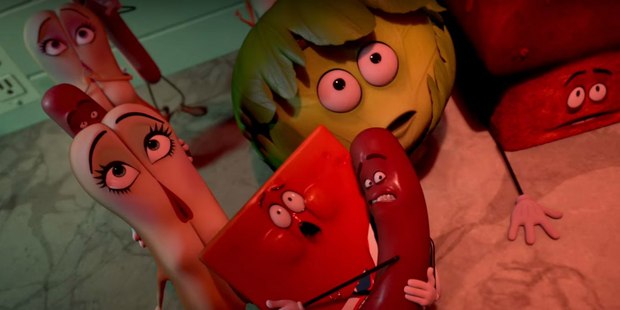 Produced for a slim $19 million, ‘Sausage Party’ made $34.3 million for its domestic opening weekend.

Sony’s R-rated animated feature Sausage Party has been the surprise hit of the summer, taking in $34.3 million at the North American box office for its opening weekend, and going on to earn $38.7 million domestically and $2.7 million overseas for an early global tally of $41.4 million.

Produced for a slim $19 million, the raunchy CG-animated feature written by Seth Rogan (alongside Kyle Hunter, Ariel Shaffir and Evan Goldberg) and directed by Conrad Vernon and Greg Tiernan is an unqualified hit. The movie follows a hot dog named Frank (voiced by Rogan) who falls out of a shopping cart and ends up leading a group of supermarket products on a quest to discover the truth about their existence and what really happens when they become chosen to leave the grocery store. Throughout appearances and interviews leading up Sausage Party’s release, Rogen, Tiernan and Vernon have touted their ability to deliver an expensive-looking movie for less than $20 million.

But now, showing once again that an animator’s life isn’t always sunshine and walk cycles, staffers at Vancouver-based Nitrogen Studios -- the producers of the animation for Sausage Party -- are claiming that they were denied pay for overtime work, and, in many cases, denied credit for working on the film at all.

The story broke last Thursday -- the eve of the film’s release -- in the comments section of an interview with Tiernan and Vernon on Cartoon Brew, and has since been picked up by numerous outlets including the Los Angeles Times, tech site Gizmodo, and The Hollywood Reporter, which earlier this week obtained a letter, signed by an estimated 30 animators on the film and sent to Nitrogen management in December, alleging that unfair pressure tactics were “used against the team: intimidating staff into working past official studio hours, disciplinary measures utilizing fear tactics that demotivate and cause distress (such as threatening to terminate employment), implying that other departments are working overtime ‘voluntarily’ as a reason to deny compensation.”

THR obtained a statement on Monday from Sausage Party director and Nitrogen chief creative officer Tiernan, who reportedly would neither confirm nor deny receiving the letter, and said the statements against the company were without merit. “Our production adhered to all overtime regulations and our contractual obligations to our artists,” Tiernan told THR. “Any time that any concern was brought up, it was handled appropriately.”

That statement is remarkably similar to the one provided by Nitrogen Studios chief executive Nicole Stinn to the Los Angeles Times: “These claims are without merit. Our production adhered to all overtime laws and regulations, as well as our contractual obligations with our artists.”

THR also reports that, according to anonymous sources, co-financer Annapurna Pictures eventually stepped in to ensure that overtime rates were paid and that meals were provided for people who stayed late to work on the film, but that back-pay wasn’t provided. Another result of the letter was the decision to minimize interaction between the directors and animators, moving daily review sessions, usually held in-person, to email.