The Chicago-based design house rose to the challenge of creating both an animated, custom typeface and a bold main title sequence logo for the return of Peter Quill, Rocket, Baby Groot, Gamora and Drax the Destroyer in 'Guardians of the Galaxy Vol. 2.' 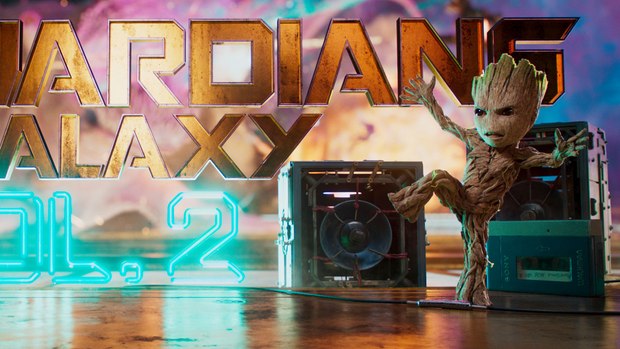 CHICAGO -- In the groundbreaking Guardians of the Galaxy (2014), director James Gunn presented Erin Sarofsky’s design studio, Chicago-based Sarofsky, with the challenge of creating both an animated, custom typeface and a bold treatment of the Guardians of the Galaxy logo for the main title sequence. For the return of Peter Quill, Rocket, Baby Groot, Gamora and Drax the Destroyer, in Guardians of the Galaxy Vol. 2, Sarofsky once again rocked both the opening titles and the “storytelling” end crawl.

“The first assignment was to explore some ideas the Marvel team had been tossing around since James wrote the opening title scene,” Sarofsky said. “In the end, we built off those initial ideas and landed on something that utilizes the typeface we created for the original movie, but executes it in a totally different way.” She continued, “When the neon look got applied to the typography, we integrated that into the Guardians of the Galaxy Vol. 2 logotype. That created unity between the titles and the logo.”

It’s a point of pride for Sarofsky that the custom font developed for the first Guardians film lives on in the headers of the new end crawl. Since the opening credits and logo appear amidst a vital opening scene, nailing the timing, placement and legibility was key.

“Even though there was a lot of great negative space to work with, the action happening in the background made it especially challenging to set glowing type on top and have it be legible,” Sarofsky added.

Sarofsky coordinated closely with the producers and artists at Framestore in London, who were responsible for creating the opening scene where the titles appear. The company also teamed up with Exceptional Minds, a group known for previous Marvel scrolls.

Sarofsky found the task of creating a new type of armature for the end crawl to engage viewers at the movie’s end while leading into the story tags, (Marvel’s well-known calling card, an exciting challenge: “This was the first time Marvel has considered treating the end crawl as a significant part of the film’s experience,” she said. “It’s also the first time we’ve worked on an end crawl. The responsibility of getting so many names spelled right just seemed daunting. James made it clear that this was an entirely new sandbox for us all to play in.”

The approved end crawl solution is based on vintage album art, but with nestled images, GIF-like animations and all sorts of Easter eggs. For type, the Din font is used along with type headers set in Sarofsky’s custom typeface.

“It’s something James painstakingly engaged in with us ... making sure it was jam packed with goodies,” she concluded. “Until the very end, he was noodling and adding stuff that he knew would blow people’s minds” Sarofsky concluded.

The studio’s project pipeline relied on Adobe After Effects for the credits and Autodesk Maya for the logotype, with The Foundry’s Nuke and Autodesk Smoke used for finishing. The end crawl design and delivery involved After Effects, Nuke and Smoke.

The team at Sarofsky made it clear they had a great experience working with Exceptional Minds: “Not only were they a wonderful collaborator for us in this process, they also are a great inspiration,” said Sarofksy Executive Producer Steven Anderson. “As a non-profit animation and VFX school and studio for young adults on the autism spectrum, we were absolutely thrilled to have this opportunity to collaborate with them.”

Visit the Sarofsky site to learn more about this project and the company.