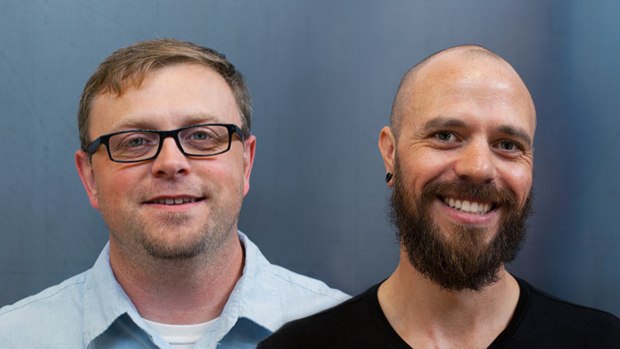 CHICAGO -- Continuing its growth and its investments into excellence, design-driven production company Sarofsky is adding creative VFX and finishing artist Cory Davis and designer Dan Tiffany to its staff.

One of Chicago’s most sought-after freelance VFX artists for many years, Davis has been an integral contributor to some of Sarofsky’s greatest achievements. With experience spanning from title sequences for the Marvel blockbusters Ant-Man, Captain America: Civil War and Doctor Strange to main titles for TNT’s Animal Kingdom and Super Bowl ads, Davis is a proven master in the creation, finishing and delivery of awe-inspiring imagery of the most exacting standards. A BFA graduate of Ohio University, he has also pursued advanced studies at The Illinois Institute of Art.

“Cory has been working with us for years now as our go-to finishing artist... and I really mean artist, because he is beyond a masterful technician,” said company principal and executive creative director Erin Sarofsky. “He is also a creative force with a distinct point of view. Matching his amazing depth of talent, his work ethic and willingness to contribute always go way above and beyond.”

“Among the Sarofsky staff, there is a spirit of reaching beyond defined roles and comfort zones,” Davis added. “I look forward to broadening the offerings for creative finishing at Sarofsky, backed by the studio’s amazing group of top-level artists.”

A highly talented young motion designer, Tiffany has been freelancing for Sarofsky and other top creative industry firms in Chicago since 2015. A BFA graduate of The Illinois Institute of Art, he began his career as an intern for specialized creative agency Leviathan before landing a staff position with Daily Planet in 2011. Since going freelance, Tiffany has worked on high-profile commercial, broadcast and theatrical projects for Comcast, Leo Burnett and mcgarrybowen, to name but a few -- and he was an integral part of Sarofsky’s design team behind the main titles for both Captain America: Civil War and Doctor Strange.

Asked what attracted him to Sarofsky, Tiffany replied, “The company’s passion for design, its desire to create the highest quality of work, and its strong sense of teamwork and collaboration.”

“Dan is a very talented animator and designer, and a true team player with a very strong work ethic,” said executive producer Steven Anderson. “And since Cory has been our go-to finishing artist for over two years, it was time to make it official and bring him into the fold.”

“Adding these two talented gents expounds upon what makes Sarofsky special,” Tiffany added. “Both increase our ability to provide viable and unique solutions to our clients’ challenges.”