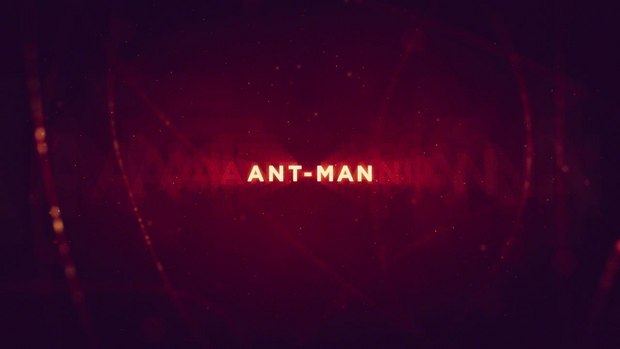 CHICAGO -- Marvel's Ant-Man, directed by Peyton Reed, was released this week on Blu-ray and video-on-demand, featuring main-on-end titles created by design-driven production company Sarofsky. Company principal and executive creative director Erin Sarofsky and her colleagues are very proud to detail their work on the project.

When the blockbuster premiered earlier this summer, Sarofsky discussed how the new project with Peyton and Marvel's executives had built upon her company's past successes with Guardians of the Galaxy and Captain America: The Winter Soldier. Now finished, the two-minute main title sequence, which Sarofsky delivered in 4K resolution, and in both 3D/stereoscopic and 2D versions can finally be shown. In the title sequence, a probing camera descends through a dark universe, moving from one field of luminescent shapes, deeper to others, as top credits appear framed inside boxes that are interlocked with the camera's point-of-view.

"With a film called Ant-Man, you might expect a main title to incorporate ants," Erin began. "But one our favorite aspects of the film is how they switch scale so seamlessly. That interest led us to explore a few solutions that were exclusively about scale."

She continued, "Once we honed in on that concept, we wanted to develop a look that was totally unique in the Marvel Universe; one that connected visually to the film without feeling like just another scene in the movie, where we could depict the macro and micro worlds in the same visual language. Inspiration from the production design for the Pym Particle, which is contained in a glowing red liquid, led me to research fiber optics and other types of lighting. Specifically, I was drawn to how textile artists weave that lighting into clothes. That became the inspiration for the look, and everything flowed from there."

Together with Sarofsky's executive producer Steven Anderson and VFX supervisor Matthew Crnich, Sarofsky described the project's workflow from beginning to end, opening the discussion with these words, "You had a real treat if you saw the film in stereoscopic 3D. It was a truly remarkable piece to watch in stereo."

While the Ant-Man titles are an intentional homage to the iconic 1977 Powers of Ten short film directed by Charles and Ray Eames, they also draw inspiration from Ant-Man itself, and the unique Marvel Universe. These twists freed Sarofsky's designers from needing to demonstrate real scientific phenomena, and yet, bringing their artistic vision to life tested the entire production team and every system in the pipeline. In fact, by expanding its expertise and capabilities to support this project, Sarofsky now offers full editorial and finishing services at the absolute highest levels. "We now have two full finishing suites, and while our design expertise is well known, our finishing capabilities are also now second-to-none," Anderson confirmed.

Essentially, Maxon's Cinema 4D was used as the primary production application, with The Foundry's Nuke for compositing and Autodesk's Smoke for finishing.

"Sarofsky's artists deserve a lot of credit for proving the viability of Cinema 4D for projects of this scale," said Crnich. "Producing stereoscopic imagery natively presented some hurdles, but defining the structure of the 3D geometry as 'splines' became the biggest modeling challenge on this project."

Sarofsky also confirmed that while the typography inside the boxes looks simple, those elements provided their biggest challenge overall. "Our title had to be exactly two minutes long and all the names are legally required to be on for a specific amount of time, so it was quite the puzzle to solve!" She credits motion designer Duarte Elvas for resolving the type technique, and editor Andrew Manne for expertly managing the complicated workflow while taking countless changes in stride.

According to Crnich, Smoke was the clear choice for assembling the project's 16 scenes in stereo while providing compositing and grading with real-time playback. "Our Smoke artist Cory Davis was a work-horse," he said. "He assembled the nightly renders for review every morning, allowing us all to see the latest versions in real-time on a large color-accurate 4K monitor. The success of Ant-Man has solidified Smoke as our finishing tool."

Asked about other technical issues that arose during the project, Crnich used two words, stereo rivalry. "We produced Ant-Man natively in stereo, rendering separate left, right and center eye channels from Cinema 4D and carrying them through compositing in Nuke and final conform in Smoke," he explained. "While the native stereo pipeline is solid, the design of this project worked against it, due to the glowing speculars and thin 'splines' in each eye fighting against one another and creating 'stereo rivalry.' Fortunately, our native stereo pipeline allowed us to view stereo shots early in the process, thus allowing us to address the root causes of the rivalry throughout production."

With the home video release of Ant-Man, both Anderson and Sarofsky shared their final thoughts on the main titles. It was Steven's very first Marvel main title as executive producer, and here's his takeaway, "What I love most about it is how it showcases Sarofsky's VFX capabilities. This is definitely opening new avenues and exciting opportunities for us a company."

And with this being her third Marvel project, Sarofsky’s final thoughts were about meeting and working with Peyton Reed for the first time. "He is a really smart, funny creative person," she added. "In the end, I am so happy that he loved the title we made for his movie!"