Toon Factory defines their path in the world of kids’ animation with new and future series including, ‘How to Shrink…,’ ‘Mood,’ and ‘The Music Traveller.’ 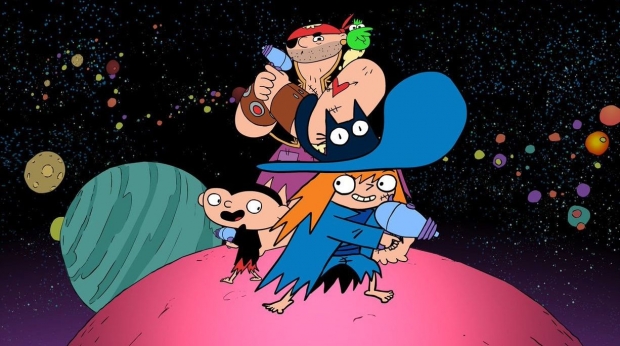 Toon Factory has announced that Sardine in Outer Space premieres May 4 on Teletoon+ (Groupe Canal +). The animated series, for 6-10 years old, is adapted from the comic book of the same name by Joann Sfar (artistic director of the  series), Emmanuel Guibert (creator of the literary bible for the series) and Mathieu Sapin, who participated in the writing with a team led by Babette Vimenet. It will premiere exclusively on Télétoon+ with 2 episodes at 11:30 am (Monday -Friday) and 5:30 pm (all the week).

“Being a producer doesn't get better than this when you can bring so much formidable talent into an            animated series based on a no less formidable heroine,” noted Toon Factory co-founder and president, Thierry Berthier. “With the essential support of Télétoon+ we wanted to produce a program that was both funny and clever - like the original comic. I feel that we have succeeded and hope that kids and their parents will embrace Sardine on screen as they have already welcomed her into their families, reveling her adventures in print.”

Sardine in Outer Space is about a sparkling young lady who lives with her friends and her uncle, Captain Yellow Shoulder aboard a spaceship. Intrepid and boundless, this explosive troupe embarks on incredible adventures where the only limit is imagination! Between visiting ever more exotic planets and their missions to save the Universe, the horrible mean Supermuscleman and his sidekick Dr. Krock are never far off.

Co-produced with Red Frog, Caribara Productions and Scope Pictures, the 2D animated series (52 x 12') was directed by David Garcia. With a budget of 6.4M€, the project is one of the first animated series produced in UHD. The group Dyonisos wrote and performed the title song and the background music is signed Olivier Daviot. The series will be distributed by Mediatoon Distribution

“The Adventures of Sardine and Little Lulu” have sold more than 215,000 copies. The 14th volume, “Archificelle Intelligence” will drop May 29th. Initially published by Bayard Presse between 2002 and 2005, the rights were acquired by Les Editions Dargaud who has released 13 volumes since 2007.

Toon Factory continues to define their path in the world of children's animation with Berthier overseeing the development of three new series:

Toon Factory continues their activity in distribution through their sister company Toon Distribution: