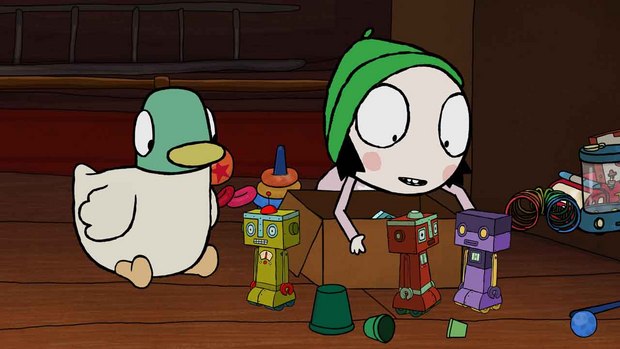 Karrot Entertainment’s BAFTA-award winning pre-school series Sarah & Duck reached a milestone yesterday with its 100th episode on CBeebies. The animated series about a seven-year-old girl, Sarah, who lives with her best friend, Duck, launched in 2013, and continues to be an on-air favorite.

The show marked the occasion with a special episode featuring a musical dream sequence, starring the popular Duck at the core of the story. Inspired by his afternoon of playtime with Sarah, discovering the narrator's old toy robots, Duck drifts into a flight-of-fancy naptime dream, imagining himself exploring a quirky and fun robotic world, with an electronic, bouncy soundtrack.

“We're thrilled to have reached this milestone of 100 stories about the unique world of Sarah & Duck,” says series producer Jamie Badminton. “The show has featured gentle continuity from the very first episode, which helps explain the amazing dedication shown from our young and old fans. It really does feel like Sarah and Duck, as characters, have grown up and made friends within their world, in front of our very eyes.

“We have had great success with two previous dream sequences set to music but this is the first time we time we have done one from Duck’s perspective,” he adds. “It is one of our richest and most striking stories so far.”

"It is a privilege to be a part of this beautifully animated, wonderful and funny show,” says   Henrietta Hurford-Jones, director of children's content, BBC Worldwide. “From seeing Sarah & Duck befriend the Shallots in the very first episode, to the heart-warming moment the duo meet in Duck Flies, all the way to the forthcoming 100th episode it has been fantastic to see this series go from strength to strength, winning the hearts -- and awards -- of audiences all over the world."

The 100th episode aired as part of a new batch of 10 episodes on the channel, which include a guest appearance from British actor Simon Callow, alongside series regulars Roger Allam and Lesley Nicol. New locations include the reveal of a new kitchen space at the Bakery, allowing Sarah & Duck to join in with imaginative cooking alongside popular characters Bread Man and Cake.