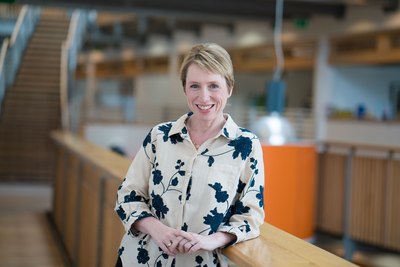 Cox will oversee the development of a new slate of Aardman intellectual properties aimed at kids and family audiences across all platforms including digital and broadcast. The projects to be commissioned will focus on the company’s signature humorous character-driven stories with global brand recognition.

The upcoming slate will combine Aardman’s hallmark storytelling, character and comedy expertise with a variety of visual styles, with Cox spearheading efforts to foster new creative talent and keep the company at the forefront of innovative content development.

"I’m simply delighted that Sarah is joining Aardman at this very exciting time,” commented Aardman founder and creative director Peter Lord. “With her flair for developing and mentoring creative people, she’s the perfect person to drive some terrific new projects.  At Aardman, we love creating characters, telling stories, and delivering them with wit and irreverent humor, and I’m thrilled to have Sarah along for the adventure."

“I am delighted to be offered this unique opportunity to help develop the creative concepts that will ultimately shape the future content of such an inspirational studio as Aardman,” Cox added. “We have been given a bold and exciting remit to find new characters, innovative concepts and creative talent that will continue to produce the top quality humour filled content that the studio is known and loved for. I am a long-time admirer of the collaborative spirit and ethos of Aardman and I am really looking forward to becoming part of that team.”

Prior to joining Aardman, Cox was the owner and Creative Director of ArthurCox, an award-winning film and animation production company she launched in 2002 alongside Sally Arthur. During that time, she established a close working relationship with Aardman, collaborating with the studio as a commercials and short film director. She directed the award-winning film, The Itch of the Golden Nit in 2011, which was created under the ground-breaking and BAFTA-Award winning Tate Movie Project, with the participation of 34,000 children across the U.K. She also co-directed the road safety mini-series The Peculiar Adventures of Hector, which won a British Animation Award and the environmental stop-motion short film Don’t Let It All Unravel, which won multiple awards and played at numerous festivals, Including the Grand Prize at Tricky Women in Vienna 2008.

Most recently, Cox created and directed the BAFTA-nominated animation pre-school series Nina Needs to Go! for Disney Junior with the second season being released in February 2015 and the educational BAFTA-nominated online series Search It Up - Azoomee. Her short film, Heavy Pockets, was also nominated for BAFTA’s Best Short Animation Award in 2004.

ArthurCox produced and nurtured a series of shorts including Emma Lazenby’s BAFTA Award-winning Mother of Many and Matthew Walker’s acclaimed short, John and Karen.  As part of the iFeatures scheme, in 2014, Cox produced her first live-action feature film, 8 Minutes Idle, directed by Mark Simon Hewis.

Before establishing ArthurCox, Cox was at Picasso Pictures from 1994-2002, where she directed several commercials for major brands including Virgin Megastores, Sanatogen and Boots No7.

In addition to her career as a prolific animation producer and director, she has served as lecturer at Humberside University, The National Film and Television School and Head of Animation at Savannah College for Art and Design in the U.S.

Cox graduated from the renowned Royal College of Art in 1992 with an MA in Animation.