Due to COVID-19, producers on the new weekly talk show turned to CBS VFX for a fast, innovative solution to seamlessly and safely integrate L.A. guests into the N.Y.-based production. 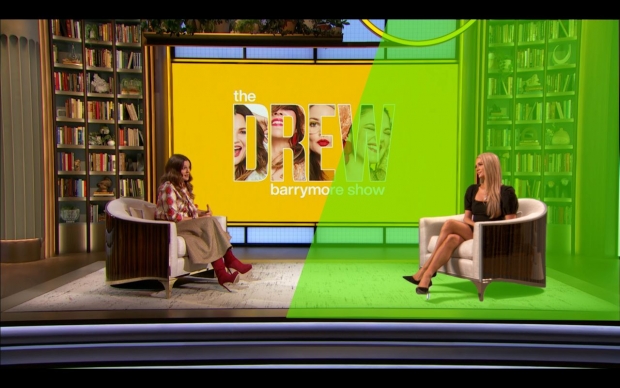 Viewers who tuned into the new The Drew Barrymore Show saw its ever-optimistic star greet guests on stage – a seemingly impossible scenario during the COVID-19 pandemic made possible by virtual production and visual effects technology pioneered by CBS VFX.

CBS VFX’s technology allows Barrymore to be on the show’s dynamic set in New York City while her guests visit in real-time from a secure set in Los Angeles, integrating both in ways that are seamless to viewers.

“Despite the difficult realities of the world, we’re able to bring our guests together with the freedom and vitality I’ve always envisioned for the show,” said Barrymore. Her show features a steady flow of weekly guests, many of whom reside in Los Angeles and are unable to travel due to pandemic-related restrictions.

According to Rich Cervini, executive vice president of programming and production at CBS Television Distribution, which produces the show, “We greenlit the show pre-pandemic. So when COVID hit, we didn’t want to sacrifice the quality and big show feel. We wanted a solution to make it feel like guests were really in the studio with Drew instead of just on a flat screen.”

For a solution, producers turned to CBS VFX for input; executive director Craig Weiss helped innovate a solution that was tested in June, then approved and fast-tracked to be ready for daily use by the show’s September 14 debut.

“The show and our team exhibited speed, creativity and a willingness to find entirely new applications for systems and software we’ve used on large-scale visual effects projects,” said Weiss. “We had to overcome technical challenges in order to give Drew a seamless, real-time experience, enabling her to be immersed with her weekly guests.  We utilized a proprietary system that incorporates custom synchronization software for remote-controlled cameras, fiber lines and data transmission. There’s a natural body language and energy that is lost with video conferencing, and we’ve enabled Drew’s show to return to the type of broadcast talk show we know and love, providing her with the opportunity to engage with her guests in ways traditional approaches wouldn’t allow.”

George Bloom, executive producer for CBS VFX, added that the virtual production and visual effects leader – which is based at CBS Studio Center in Studio City – is involved in solutions for productions, networks and studios beyond its parent company. “The solutions we’ve created for The Drew Barrymore Show are great examples of our commitment to helping producers find ways to achieve their visions safely, effectively and in ways that bring enormous value to their projects. We’re excited to make the technology available throughout the industry.”

CBS VFX has developed groundbreaking technology and created visual effects for multiple series across many networks, including All Rise on CBS, This Is Us on NBC, and Netflix’s Dead to Me.