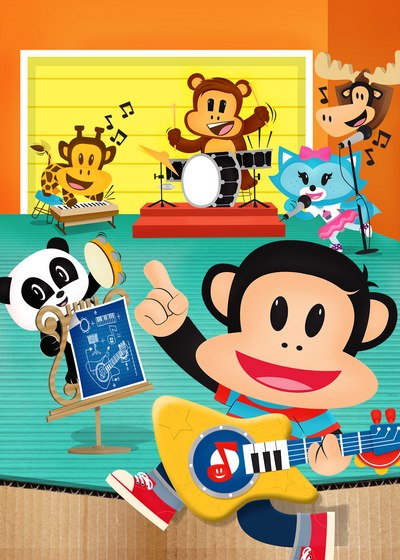 Saban Brands announced that its animated preschool series, Julius Jr., will be launching this year on Discovery Kids Latin America, the region’s #1 network for preschool children. The deal, which was finalized at NATPE, includes all 26 half-hour episodes and was negotiated by MarVista Entertainment, the exclusive international distributor for Julius Jr.

“In addition to core themes of imagination, teamwork and friendship, Julius Jr. has a lot to offer young audiences throughout Latin America,” said Frederic Soulie, Senior Vice President of Global Distribution, Saban Brands. “The series not only has a recognized, global appeal from the Paul Frank family of characters, but also incorporates captivating elements such as original music that families can enjoy together. All of these aspects are certain to make audiences throughout the region connect with Julius Jr.”

“We are proud to build on our great relationship with Discovery Kids Latin America – who continue to demonstrate a tremendous amount of passion and dedication to preschool content,” said Fernando Szew, CEO of MarVista Entertainment. "With an established worldwide following and the invaluable support of the Saban Brands global team, Julius Jr. represents quality programming that can attract a large viewership and sustain that audience throughout its run, and we look forward to introducing this new series to kids throughout Latin America.”

“This series is fun, imaginative and reinforces the Discovery Kids brand message,” added Flavio Medeiros, Director of Programming for Discovery Kids Latin America. “Julius Jr. fits beautifully with our goal to motivate children to identify with real-life experiences while also offering a safe haven that nurtures their innate curiosity.”

Julius Jr. first premiered in the U.S. on Nick Jr. in September 2013 and will begin broadcasting internationally on TF1 in France later this year, with other prestigious outlets to follow. The series follows Julius Jr., a funky monkey with a penchant for invention, and his best pals who use equal doses of imagination and inventive spirit to help each other overcome challenges big and small – teaching kids that the best inventions are the ones that help your friends. Together, they build a playhouse out of a simple cardboard box, but to their surprise and delight, the friends discover that ordinary objects magically come to life and amazing adventures are just a door away!