Russian animated feature, ‘Kikoriki: Legend of the Golden Dragon,’ selected to screen out of competition in the International Panorama category at the 19th Shanghai International Film Festival. 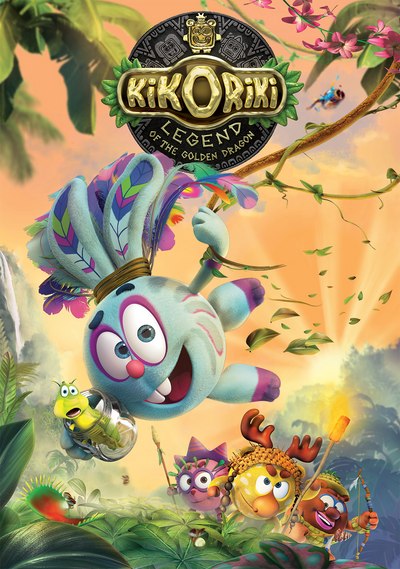 Russian animated feature Kikoriki: Legend of the Golden Dragon has been selected to screen in the non-competition program at the 19th Shanghai International Film Festival (SIFF) which will be held on June 11-19, 2016.

Directed by Denis Chernov, Kikoriki: Legend of the Golden Dragon is a feature length adventure comedy produced by animation studio Petersburg and the Riki Group, with support from the Cinema Foundation of Russia. The storyline depicts the Kikoriki that go to the wild jungles where dangerous adventures are waiting for them.

The film has already entered the list of the 10 most successful projects of the Russian film distribution in the history of modern Russian animation. More than 1.4 million viewers watched the movie in Russia.

The Riki Group is currently producing the third part of Kikoriki franchise -- a feature length film Kikoriki: Deja vu which will be released in fall 2017 – winter 2018.

“It is a big honor for us to know that our new film was selected for screening at the Shanghai International Film Festival. We consider China to be one of our key markets; and the audience here reacts positively to animation projects of high quality and goes to the cinema with pleasure. I would also like to mention current trend of rapprochement between Russia and China in the sphere of not only fiction film production but also the production of animated films,” Diana Yurinova, VP of International Distribution at the Riki Group. “At this moment we actively negotiate with leading Chinese companies about film distribution and co-production of our next part of the trilogy. I'm going to reveal you a little secret: the new film takes place in Ancient China where our heroes will have exciting adventures.”

Kikoriki: Legend of the Golden Dragon will be screened at Shanghai International Film Festival on June 13the and June 18th in the non-competition International Panorama program.