Duo of El-P and Killer Mike fight a malicious killer robot police force in 2D short, directed by Sean Solomon, based on track from the band’s latest album, ‘RTJ4,’ currently #1 on the rap album chart and #4 on the Billboard Top Album Chart. 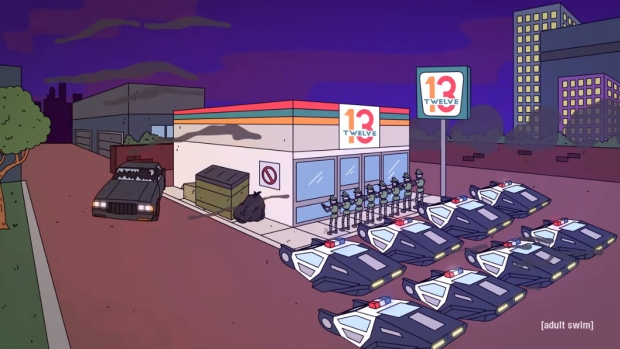 The duo of El-P and Killer Mike, also known as Run the Jewels, just dropped their new 2D animated music video, Yankee and the Brave (ep. 4) from their hugely popular new album, RTJ4, currently #1 on the rap album chart and #4 on the Billboard Top Album chart.

Directed by Sean Solomon, animated by Titmouse, and made in collaboration with Adult Swim, the music video brings the song’s action film-ready narrative to life as Mike and El are pulled into a standoff with a malicious robotic police force. A Nazi skeletal robotic police force to be exact!

“I love that this silly cartoon has a strong political message,” says Solomon. “Watching what's going on in the world is really difficult. Making this video was cathartic and it's nice to be able to find humor and wackiness in all of it.  It was great working with Run the Jewels; they had a ton of great ideas. Should there be a Run the Jewels animated series? I think yes.”

Chris Prynoski, Titmouse founder and president said, “Killer Mike and El-P would f*** up some robot cops in real life, so I consider this animated music video for Yankee and the Brave a documentary - that documents the future. One day the events of this video will come to pass, and now we know what will happen through the wonder of cartoons. The prophecy of Run the Jewels has flowed through the Titmouse animators’ hearts and into their pencils. You can watch it before it happens as magical, moving drawings.”