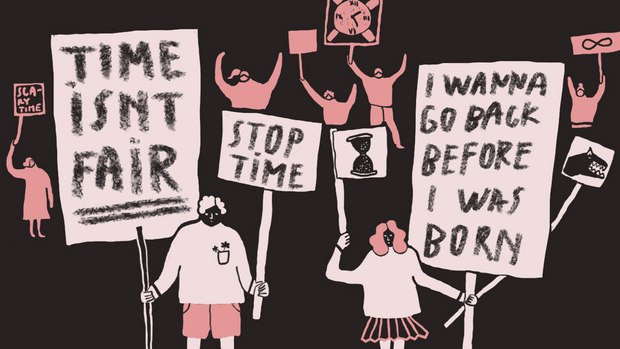 ENTRANCE (also known as Guy Blakeslee) has been described by Pitchfork as “a psychedelic shaman bringing us news from other planes of existence,” and will be releasing his EP, Promises, on September 16th.

The video’s whimsical visuals were inspired by Stephen Hawking’s theory of time travel, as well as the universal experience we have coping with time’s destructive and constructive powers and mythology, while the melancholic but positive mood were motivated by the song’s vocals and lyrics.

While Burkova is most comfortable working with what she calls “very messy tiny sketches” so that part of the design is left to accidental lines and shapes, the video for “Promises” was created frame-by-frame entirely in Adobe Photoshop:

“Two years ago I used some of ENTRANCE’s lyrics for my own project so I am super happy now that the circle has closed and he gets to use my drawing for his music,” Burkova comments about the project. “The underlying theme is that life is inherently difficult within the restrictions of time, but none of it matters on a cosmic level and there is beauty in accepting that.”

Burkova uses visual metaphors to express the cycles of life: a two headed creature splitting and reconnecting, a snake biting its own tail, things morphing into each other. “The video also loosely follows children and animals gradually uniting into bigger groups on their march to change our perception of time,” she says. “Nothing is explicit on purpose; one can tell the theme is time but the metaphors are open for interpretation.”

Burkova recently finished an art residency at the Croatian island of Obonjan and is currently preparing a solo exhibition and setting up an illustration collective. You can follow her on Instagram at instagram.com/thedrawingdoor.